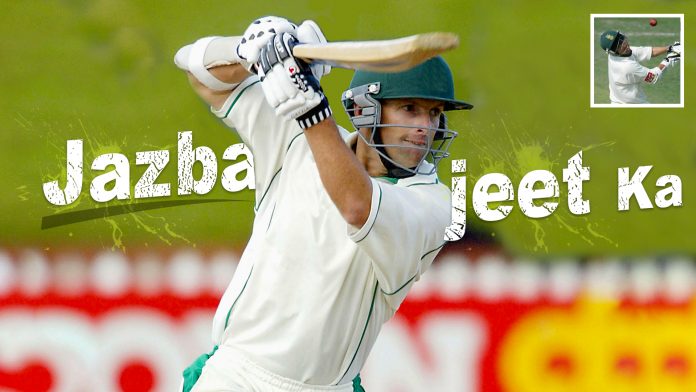 Let’s write about Gary Kirsten today, let’s write about Gary Kirsten tomorrow, let’s not forget to write about him a day after – He has been able to showcase all the virtues necessary to play cricket at the highest echelon. Seldom we an individual blend dedication and grit while epitomizing the facet named perfection in most beautiful way possible and on both occasions when Kirsten stepped on to the ground against Pakistan on 17th October 2003, it felt that the national crest was imbibed on his chest. With this, MyTeam11 brings to you another glorious chapter of #JazbaJeetKa:

Yousuf Youhana made his captaincy debut in the game but lost both the toss and the morning session. Graeme Smith literally bullied the inconsistent Shoaib Akhtar in his first four overs when he clattered him with bludgeoning venom. Mohammad Sami, on the other hand, was the antithesis of his partner. He bowled a teasing spell, restricting the flow of runs and occasionally flirting with batsmen's edge. He was rewarded when he pitched a rare one short and wide, and Smith got a top edge while trying to pull him over midwicket.

His departure led Gary Kirsten to the wicket who played at will and collected boundaries at the start of the innings to put the bowlers under pressure. Seeing the partnership building, Yousuf introduced Danish Kaneria into the attack, who immediately trapped Gibbs for 27.

Kirsten along with Kallis rebuilt the South African innings and just when the duo was looking good, the latter was sent back to the pavilion by Danish Kaneria. Kaneria puzzled Kallis and wicketkeeper Moin Khan didn’t do any mistake. South Africa lost the third wicket at 154 runs and just five runs later, Shoaib Akhtar, bowling around the wicket, dug one in short to the well-set Kirsten. The left-hander looked to pull but was beaten for pace as the ball smashed his face. Kirsten staggered to his knees as the Pakistan team huddled around him. He had to retire hurt for 53, while x-rays soon revealed that he had a broken nose.

The wickets kept tumbling for the Proteas and eventually the innings were bundled out for 320 runs. In response, Taufeeq Umar’s 111 along with Asim Kamal’s 99 helped Pakistan to take an 81-run lead.

South Africa lost regular wickets in the second innings, and at 149 for four, Kirsten walked out to bat, his face barely recognizable with all the bruises. He showed remarkable grit and scored a hard-fought 46 before being the seventh man out. Pakistan eventually cruised home by eight wickets, but Kirsten’s heroic batting in the second innings remained one of the talking points of the match.