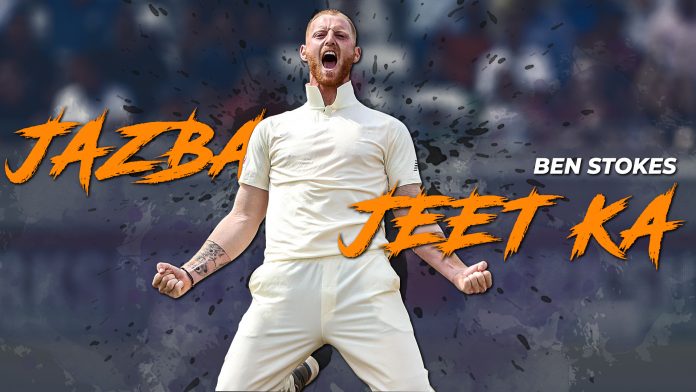 England team was bundled out for 67 in the first innings of third Test match and Australians, who were 1-0 up in the five-match Ashes series, asked the World champions to chase 359 on a sluggish track and the way three lions had featured in the Test match – it looked a lost dream until Ben Stokes scripted a stunning turnaround.

On the intensely dramatic final day of the Test match, England lost wickets at a regular interval against ‘overly’ confident Australia team who would have retained the Ashes with a win in Leeds.

When England’s last batsman, Jack Leach, joined Stokes at the crease they still required an unlikely 73 for victory. However, Stokes farmed the strike expertly with his 10th-wicket partner and struck the ball as sweetly as one could dream of, once finding the crowd with an outrageous reverse sweep, and on another occasion stepping outside off stump to scoop Pat Cummins to fine leg for six.

The 124th and 125th over encapsulated the moment when the force was with England. Cummins was hoicked to the long leg by Stokes but Marcus Harris put a tough catch down. Stokes made the Australians pay with two fours and the equation was down to under 10. When Stokes blasted Lyon down the ground, England needed two runs and then two incidents took place which cost Australia dearly. Lyon missed a run-out off Leach and then the next ball, Stokes missed a sweep and Australia appealed for an LBW. Umpire Joel Wilson gave it not out and Australia did not have reviews.

Australia's poor reviewing and poor umpiring bit them hard and the Test was almost gone. Leach, who had hung in, nudged Cummins to square leg. The Test was tied. Stokes then unleashed a vicious drive through cover and England had achieved their highest chase in Test cricket.

There is a pocket of supporters — behind deep point as Stokes plays the shot — all dressed in green shirts with yellow caps, who perhaps are not quite so delighted, but even they can console themselves with the knowledge that they have just witnessed arguably the finest innings Test cricket has ever seen.

Though the third Test was all about Stokes, two days on from his remarkable, vital spell of 16 consecutive overs, here once again he refused to see England beaten. It was an innings of vast range, from the indomitable defence of its early stages — at one point he had made just three off 73 balls, a strike rate of under-five — to the unorthodox hitting with Jonny Bairstow, and then the explosive fifth gear shift— that 10th wicket partnership of 76, in which 74 came from his bat and just 44 balls.

In total he struck eight sixes, eclipsing Kevin Pietersen's record for an Ashes innings set all those years ago on another remarkable late summer afternoon in 2005.

He finished with unbeaten 135 – his slowest as England recorded all-important win to keep the series alive and made the world to believe that Ben Stokes can do anything.

Will this Test match be termed as greatest ever? – Well, time will tell us. But we can stamp authority and say, ‘It was one its kind, which will go as the highlight of the inaugural edition of World Test championship’.