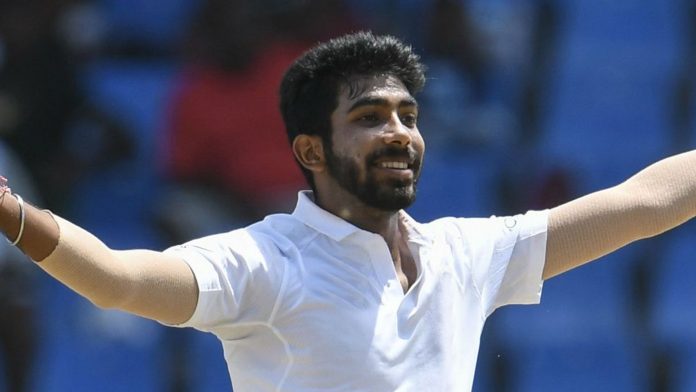 Jasprit Bumrah undoubtedly is ruling in cricket since his debut. Famously, known to execute perfect Yorkers in any situation, Bumrah’s achievements in the recent past has been remarkable. In the ongoing West Indies vs. India Test series, 25-year-old medium-pacer picked up a brilliant hat trick in the first innings of the second Test match to destroy the West Indies top order. With this extraordinary bowling performance, he became the third Indian bowler to pick up a hat trick in Test cricket. Before him, Harbhajan Singh and Irfan Pathan were the two Indian bowlers who claimed a hat trick.

The unorthodox medium pacer, Bumrah dismissed Darren Bravo, Shamarh Brooks and Roston Chase in three consecutive deliveries on the second day of the second Test in Jamaica to achieve that feat. However, the hat trick ball was an interesting one. Roston Chase was on the strike and ball hit him on his leg. India’s initial appeal for LBW was turned down by the umpire. After discussion, Indian skipper Virat Kohli straight away went for the review and the big screen showed that the ball was hitting the stumps. Before this, previous hat trick in Test cricket came two years ago, and it was taken by England’s Moeen Ali at the Oval against South Africa.

In his 12 appearances in Test matches, Jasprit Bumrah has now taken 60 wikcets at an average of 19. To be on an interesting note, all the Test matches he’s played have been away from home, and he has already taken a five-wicket haul in all four countries he’s played till now.