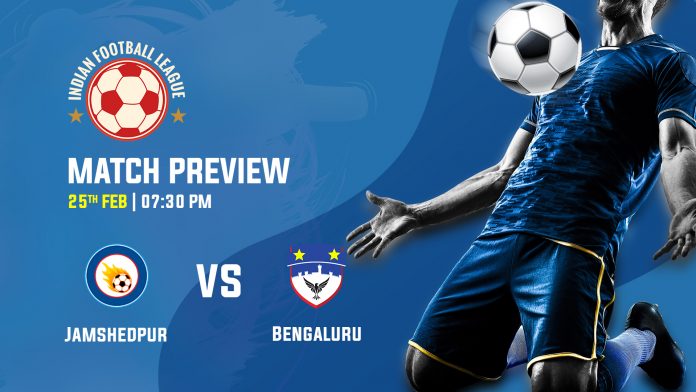 Jamshedpur and Bengaluru wrap up their campaign on Thursday night when they take on each other in Indian Football League 2020-21. Both sides have been eliminated from the playoffs.

Jamshedpur and Bengaluru will end their Indian Football League campaign tonight. Both sides beat Mumbai this month to raise their playoff hopes, but the table has been changed. Bengaluru lost to Goa and was eliminated from the top four race, while Jamshedpur cannot get past 27 points, so they also stand eliminated.

Red Miners can blame themselves for some poor games last month. In January, Jamshedpur didn’t even earn a single win. If they could have converted one or two draws into the win, the picture would have been in their favour. Jamshedpur defeated Mumbai by keeping a clean-sheet to strengthen their chances to finish at the sixth spot. The first half ended without any goal, and Jamshedpur dominated the second half. In the 72nd minute, substitute Boris Singh Thangjam sent the ball into the net. Sergio Lobera made few substitutions, but nothing changed in Mumbai’s game. David Grande doubled the lead for Jamshedpur FC through a pass from Monroy. A draw will be enough for Red Miners to take the sixth spot in the table, and if they lose, they will finish at seventh.

Meanwhile, Bengaluru also have the same story. They started the campaign very well, but two bad things hurt them throughout the season. In the first half of the season, they were held for a draw when they scored the first goal. In the second half, they dropped so many points. They lost seven matches and played the same number of draws. Blues sacked their head coach during this campaign. After a 4-2 victory against Mumbai, Blues had their fate in their hands, but Goa spoiled the party.

Hosts knocked Blues out of the competition with a 2-1 victory. Igor Angulo struck the first goal in the 20th minute, and Redeem Tlang doubled the lead with a goal just three minutes later. Bengaluru came back into the game when Suresh Singh Wangjam scored a goal after receiving a good pass from Cleiton Silva. Goa could have added two more goals in the second half, but Gurpreet Singh Sandhu made fine saves. Bengaluru would aim for a winning finish. When the last time both sides met each other, Red Miners had the laugh with a 1-0 win.