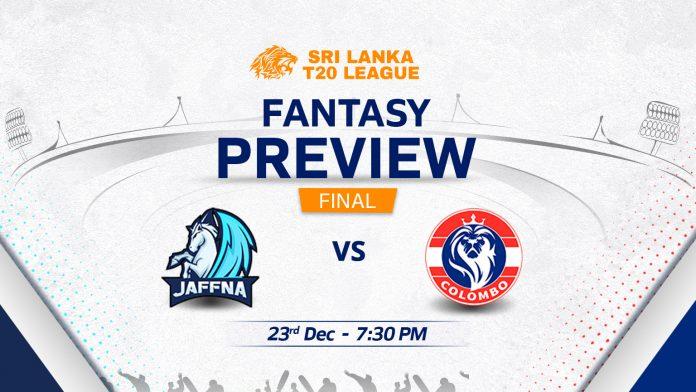 The final of the 2022 Sri Lanka T20 League is upon us, with Jaffna, the defending champions and winners of the last two tournaments, facing off against Colombo. The Kings have had a strong season, losing only two games, and will be led by T. Perera, who has a great record against the Stars and will be looking to guide his team to a hat-trick of titles.

The team will be relying on the likes of R. Gurbaz, A. Fernando, S. Samarawickrama and S. Malik, while on the bowling front, B. Fernando and Perera will be tasked with making early inroads.

Led by A. Mathews, Colombo will be looking to secure their first title win. The Stars’ batting will be anchored by the likes of N. Madushka, D. Chandimal and C. Asalanka, while their bowling attack will be spearheaded by K. Rajitha, S. Lakmal and M. Nabi. Despite their inconsistent run throughout the tournament, the Stars have performed well in the playoffs and will be hoping to continue that form in the final.

Venue & Timings of Jaffna vs Colombo

Just like the previous matches, the final match between Jaffna of the Sri Lanka T20 League will take place at the R.Premadasa Stadium in Colombo. The match is scheduled to start at 07:30 PM IST on 23rd December 2022. The lineups will be out on MyTeam11 at 06:30 PM IST.

The pitch at the R. Premadasa Stadium has proven to be a batting pitch in the past. The bounce on the pitch helps the batters as the batters can play the ball on the up. The fast bowlers don’t get much help from the pitch. With that being said, the spinners get a good turn from the pitch.

A. Fernando (Jaffna): The Jaffna’s star-batter, A. Fernando has been a breakout player in the 2022 Sri Lanka T20 League. So far, Fernando has scored 289 runs, being the batter with the most runs in this year’s edition.

D. Chandimal (Colombo): Colombo’s wicketkeeper has proven to be a valuable player in the squad. D. Chandimal has scored 238 runs in the tournament so far. Chandimal’s shot selection and explosive batting will make him a player to watch out for.

Hope the team preview was useful for you. It’s now time to join exciting cricket action on MyTeam11. Make fantasy teams in Jaffna vs Colombo and you might win big cash prizes. MyTeam11 is now also available on the Play Store! So, stop waiting and START PLAYING!