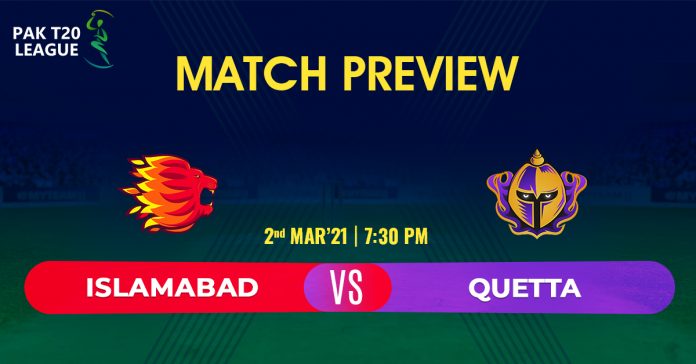 Quetta will face Islamabad in the Monday encounter of Pak T20 League 2021 to eye the first victory of the season. Meanwhile, Islamabad will look to get back to the winning track.

Quetta will be back in action after suffering three consecutive defeats and they can only blame their bowling unit. The Sarfaraz-led side showed good intent with the bat but they couldn’t balance it with bowling. In the opening match, batting let them down but in the next two matches, Quetta improved their batting but it wasn’t enough to defend. In the last match, Skipper Sarfaraz fired and smashed 40-balls 81 and Azam Khan provided an acceleration with 47 off 26 balls. Quetta posted 198 on board but for one more time, they allowed the opposition side to overcome their bowlers.

Quetta tried Del Steyn and the South African star conceded 21 runs in penultimate over to assure a 3-wickets victory to Peshawar. Delport replaced Chris Gayle and Faf came to bat at number three. The batting lineup is pretty strong. Any change in the squad is unexpected and Quetta will look for the toss win because the toss is playing an important role. No team has won a single match while batting first and chasing sides have made the 180 plus chases a cakewalk. Quetta cannot afford a loss here because one more defeat can make their task to playoffs pretty tough.

Meanwhile, two-time winner Islamabad had a solid start to the season and they won the first two matches before losing to Peshawar in the last game. Shadab-Khan-led side lost to Peshawar in a silly manner by scoring just 118 runs on a pure batting wicket. Alex Hales continued his top form with 27-balls 41 but he didn’t get any support from another end. When Hales got out, Islamabad were 82/5 and they added just 36 more runs for the last 5 wickets. The capital outfit picked two early wickets in the first two overs but Peshawar didn’t trouble much in the chase and finished the game in 17.1 overs. Islamabad has a good balance and they just need to focus more on its depth. The local players will be crucial in middle-order if they get a good start from the foreign top-order. Quetta looks favourites but still, toss will play a major role.

Karachi’s track is a batting paradise and it offers a good amount of assistance to batsmen. Pacers can take some help from the pitch. Chasing side will have an advantage considering the behavior of the pitch.