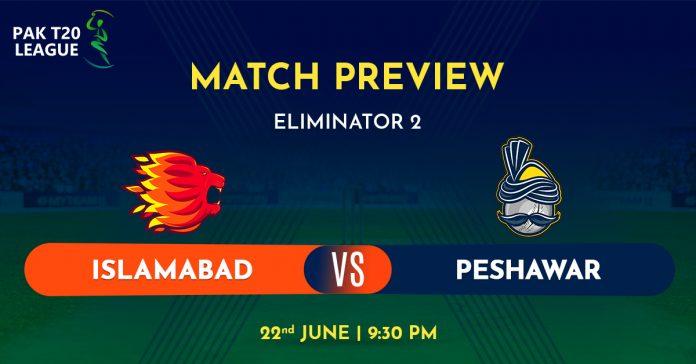 Islamabad will face Peshawar in the second eliminator game of Pak T20 League 2021. The winner of this game will take on Multan in the final on June 24.

Islamabad and Peshawar will now fight out for the place in the final of the Pak T20 League. Both sides had a rich history of performing well in playoffs and they are again facing each other. Both share three titles together and both have played two finals earlier. It will be their third final in Pak T20 League if they win tonight.

Islamabad did a wonderful job in the league stage by winning eight games out of ten and finished at the top but they lost to Multan in the qualifier game. It was their first loss after five consecutive games. Multan posted 180 on board, thanks to the late acceleration by Khusdil. Islamabad failed to stand tall in the chase. Khawaja batted very well and scored 70 off 40 balls but he didn’t get support from another end. Middle-order was exposed and Munro also got out on duck. Islamabad have been a consistent side and also playing quality cricket. Munro and Khawaja both are in great touch. Iftikhar is also in top form and showed his great form in middle-order. Their bowling unit is also doing very well.

Meanwhile, Peshawar knocked out the defending champions to earn the ticket to the second eliminator. Peshawar chased down 176 in a last-over thriller and Zazai was the star of the chase. Afghanistan star scored 77 off just 38 balls to make the chase easier. Peshawar made it slightly interesting in the second half of the chase but they held the nerves. Bowling might be a concern as they conceded easy runs to Karachi after a promising start. They have already conceded the tournament’s highest ever total. Wahab is their main bowler but he is not getting quality support from another end. Peshawar have also played two finals before and they have the best combination of experience.

When the last time both sides met each other, we witnessed a high-scoring thriller. Peshawar have won three games out of the last five. One game was abandoned and one game was won by Islamabad. Out of four complete games, three times batting first sides had the final laugh.

Abu Dhabi’s track is good for batting and it’s an ideal surface to witness a T20. It offers good assistance between bat and ball. It’s a knockout game so chasing would not be easy here.

Hundred against Peshawar and 70 in last game, current form is nice

274 runs so far this season, a handy player for Peshawar