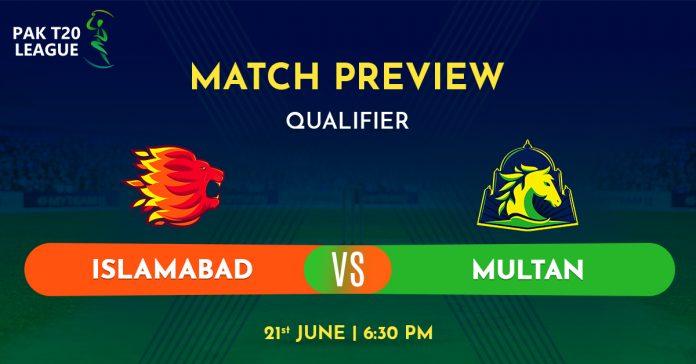 Two-times winner Islamabad will face Multan in the qualifier game of Pak T20 League 2021. Islamabad topped the tale with 16 points, while Multan finished second in the table with 10 points.

Two in-form and top two sides of the league stage will lock horns in the qualifier game of Pak T20 League 2021. Islamabad did a wonderful job by winning eight games out of ten and finished at the top. They have been a top side of the season.

The best thing is, both sides lost just one game in Abu Dhabi which means we will see a cracking game between two sides. Islamabad maintained their momentum from Karachi to Abu Dhabi and they lost just one game here in UAE. They also ended Multan’s 4-match winning streak on Saturday night. Multan were the only undefeated side in Abu Dhabi but they suffered a defeat which might give them an idea to improve things.

Under Mohammad Rizwan, Multan surprised everyone. After Karachi's leg, no one was giving them a chance in the top four but they finished second. One win can give them an entry into the finals. Multan also participated in last season’s playoffs but missed out the chance in the playoffs. They haven’t won the Pak T20 League trophy yet and they are also the only franchise that didn’t feature in any Pak T20 League final. Their net run rate was pretty strong as they become eligible to play in the qualifier. Rizwan’s side is doing impressive things on the field and they rely on their local players who are showing collective brilliance. Talented Dhani is the leading wicket-taker of the tournament with two 4-wickets hauls and Rizwan comes second in the list of top run-scorers.

Meanwhile, Islamabad are just two wins away to script history in Pak T20 League. They are the most successful franchise in the tournament with two titles and they have appeared in two finals before. They are unbeaten from the last four matches. In the previous game, they overcame Multan by 4 wickets, thanks to Wasim’s 4-wicket haul. Khawaja and Munro were rested in the last game and both will be back in the side. Shadab captained the side and secured one more win.

Islamabad is in terrific form and they are likely to win this game. They have been a consistent side and also playing quality cricket. Munro and Khawaja both are in great touch. Iftikhar is also in top form and showed his great form in middle-order. Their bowling unit is also doing very well. Multan also have quality players and the recent form is showing their value. Islamabad now have the upper hand in H2H when it comes to the last five encounters. They have won three games out of the last five and surprisingly, chasing sides have won all five games. It means toss will play a major role.

Abu Dhabi’s surface is good to bat and it offers good assistance to bowlers and batsmen. It’s a playoff game so it might be a quality game. Any score above 160 would be the competitive total and chasing might be tricky.

2 half-centuries on this surface, a hard-hitting batsman in the opening slot