Is Virat Kohli the most underrated T20I player? 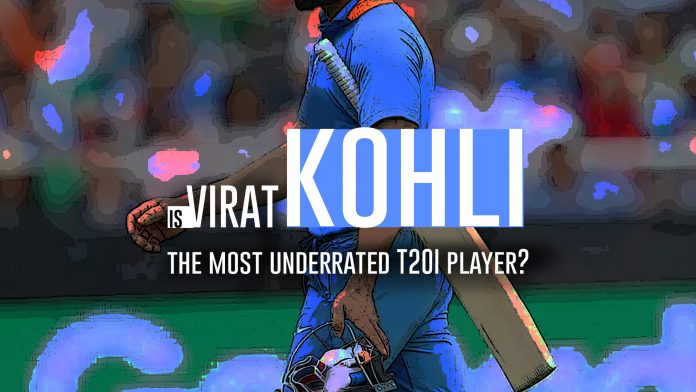 11th Dec brought a blockbuster match filled with lots of drama for the Indian cricket fans. India sealed their T20I series win (2-1) by 67 runs. Needless to say, the highlight of the pulsating match was the Indian skipper, Virat Kohli, who crumbled West Indies by posting a mammoth target of 240/3 (India's third highest T20I total). Kohli clobbered 70 runs off 29 balls and guided India to victory. He also hammered his highest T20I score of 94* in the first T20I. Virat Kohli is a cricketer par excellence. The ever-evolving, out-of-this-world and formidable player, Virat, is indeed class apart. Despite giving such great performance in T20I, Virat is deemed as an underrated T20I player. If it is asked in which format does Virat Kohli shine the brightest? The answer would probably be ODIs.

Kohli is currently in a prolific form in T20Is

Indian captain has been the maestro of all the formats, but when it comes to ODIs, he is unbelievable. The point to be noticed is that after being recognized as No. 1 ODI batsmen in ICC rankings for the first time in 2013, Kohli also earned success in T20 format with the Man of the Tournament title. He bagged this honor twice (2014 and 2016) at the ICC World Twenty20.

In the 3rd T20I against West Indies, Kohli showcased an exemplary performance and added another feather in his hat. He reached 1000 runs at home in the shortest format and became the first Indian to reach to achieve this milestone. New Zealand’s Martin Guptill (1430) and Colin Munro (1000) are the other two players who have attained this feat. With this, India’s batting mainstays, Virat and Rohit Sharma, have become the joint highest run-scorers in T20 internationals with an equal number of runs i.e. 2633. Kohli has scored 24 fifties in his T20I career so far, Rohit has hit 19 half centuries.

The run-machine is known for his technical skills

Kohli is a unique player with a strong understanding of technical skills. Famous for his on-field aggression, he prefers to bat in the middle order with an open-chested stance, quick footwork and a strong bottom-hand grip. With an ability to pace an innings, he has the calibre to bat under pressure, converting the innings into a big knock.

There’s no denying that Kohli performs exceptionally well in ODI

If we keep his recent form aside and take a look back at Virat Kohli’s old performance, we’ll notice that Kohli is undeniably better at ODI than T20I. Being one of the most sought-after batsmen across the globe, Kohli has the best ever Test rating (937 points), ODI rating (911 points) and T20I rating (897 points). Looking at the stats, it is evident that Virat has always been a consistent player in ODIs. But with such a display of power-hitting in T20, it seems the captain is getting more than a hang of this format.

Since 2016, Kohli has finished with maximum runs in all Tests, ODIs and T20Is each year. After the inception of T20 format, Kohli became the only player to have accomplished a hat-trick of most runs scored in the world across formats 3 years in a row. With these stellar records, Virat has already established himself as one of the best players in limited over cricket of all time.