Is Rishabh Pant trying too hard on the field? 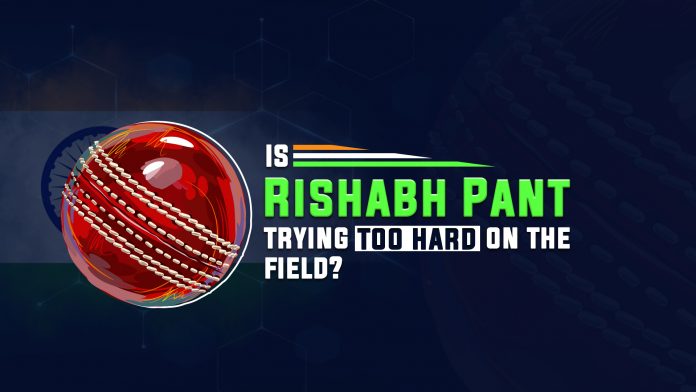 Rishabh Pant has been under the pump for quite some time now and yesterday’s match added more to his misery. Pant’s wicketkeeping was all over the place last night with the young wicketkeeper making some basic errors. In the 6th over bowled by Yuzvendra Chahal, Bangladesh’s opener Liton Das got stumped. It was an easy stumping chance for Pant, but as it turned out he grabbed the ball slightly in front of the stumps and Liton was declared not out. The ball was declared a no ball and Das dispatched the free hit for a boundary.

However, Pant redeemed himself by effecting a run out later in the innings but the pressure and nervousness was visible on Pant’s face as he also missed few throws. Thus, gifting some extra runs to Bangladesh. Fans were quick to criticize his school boy error.

It’s not for the first time that Rishabh Pant was criticized for his keeping. The Delhi cricketer’s wicketkeeping skills have been under scrutiny for a while now, and was the sole reason behind his omission from the world cup squad.

Rishabh Pant has been termed as the successor to M.S. Dhoni and this hasn’t helped Pant at all. The pressure of being compared to one of India’s finest cricketer has taken a toll on his performance. Rather than playing his natural game, the wicketkeeper-batsman, as one would say, is trying too hard to be like him. Not just his wicketkeeping, his batting too is getting affected. Pant has scored 149 runs in 9 matches at an average of just 21.28 in 2019. Not just lack of runs, it’s the manner of his dismissals that would have the management worried.

There is no doubt that Rishabh Pant has the potential to be a great wicketkeeper-batsman for India, but he needs stop putting pressure on himself. Instead of trying to be the next Dhoni, he needs to focus on being the best Rishabh Pant as mentioned by Adam Gilchrist.

Selectors, Kohli and Shastri have shown great faith in him but it will not be long before they start looking for a new prospect as the T20 World Cup is approaching next year. With Sanju Samson and Ishan Kishan performing well in the domestic circuit, Rishabh Pant has few chances left to get it right.