Is MS Dhoni’s prolonged rest an undercover to side-line him from game? 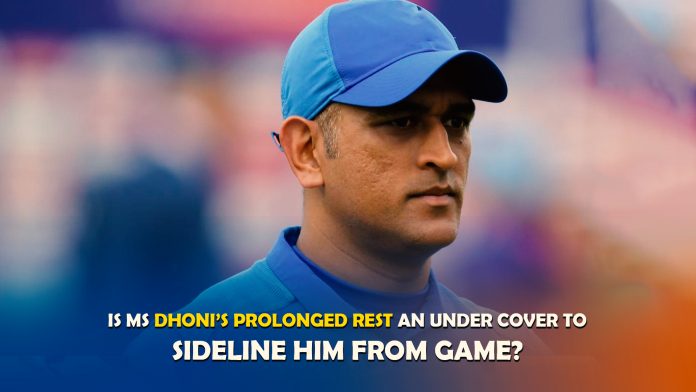 From growing up seeing a shoulder-length haired man finishing the game with a six, the crowd and commentators cheering, “MSD finishes off in style, yet another time,” to watching him grow into a man white beard, substantially going off the field or say the game. We’ve definitely come a long way in last few years, looking at the rise of this legendary player, Mahendra Singh Dhoni, witnessing his downfall, and at last, gearing up for bidding an emotional goodbye.

Taking a break from India tour to West Indies and then making himself unavailable for the series against South Africa, MS Dhoni is all over the news since long. But this time, the limelight is bringing a lot of questions and speculations for the player.

Plenty of reasons, uncountable under covers, for just one thing, that will change the course Indian cricket. It’s high time that we talk about the possible reasons being used as a shield to side-lining MS Dhoni from the game.

To begin with, the first on the list is the 8-month long break of the champion. Though demanded by the player himself, it is one of the biggest covers that is protecting the side-lining process. Dhoni took a 2-month break to serve his army regiment right after the world cup to make himself unavailable for the selections of the upcoming series against South Africa; the legend is trying to expand his break in one way or the other.

With this prolonged rest, that seems sort of not-ending anytime soon, MSD is trying to drift himself from the game. The break can be for making a strong comeback, but with the retirement rumors going around, it looks more of a planned move to distance himself from the game & give young players a chance.

Focusing on Serving the nation

Honored with the rank of Lieutenant Colonel, Dhoni has certain deliverables towards the army of the nation. On the cusp of wrapping up his cricket career amid all the speculations, Dhoni is now focusing on contributing towards his army duties that came with the position. Known as a man of his words, a calm and sorted person, MSD always does justice ton his duties, be it on the field or off the field. Thus, he’s now finding solace in well aware of what the future holds in for him; he’s now opted for another means to bring glory to the nation.

Rishabh Pant in the limelight

Rishabh Pant, the possible forerunner to Dhoni, is taking the internet and media world by storm, sometimes with his aggressive or impatient shots, and sometimes with his record-breaking spree. With time, Rishabh Pant is being given preference as the wicket-keeper for team India. The preference can either be for sharpening his skills and getting him accustomed to layers, pitches, and the intensity of the game. Or the preference could also be the preparation for replacing MSD.

No matter what the reason is, the final result is Rishabh Pant becoming selectors first choice that reflects the decreasing possibilities of Dhoni getting back in the team anytime soon, or even if it happens, possibilities are that his presence in the team might not be a long-term affair.

Everything comes with a best before date, and cricket is the game of hard-hitting shots, super-fast bowling action, and a sharp eye, requires a lot of energy, lightning-fast speed, and good stamina. Everything that deteriorates with age. And if the truth is to be told, MSD is at the par of the age limit for cricketers, making it difficult for him to continue being in the game. Thus, referring his age, the player is definitely looking for chances, options or ways to stay in the game but not stay in the game. That’s why choosing to distance him from the game.