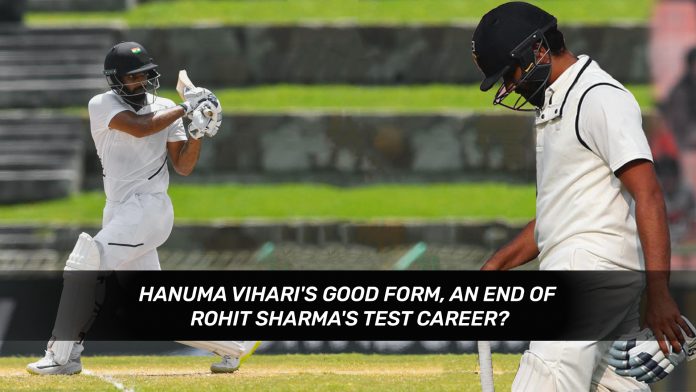 It is hard to believe that a player who holds the record of scoring three double centuries in one-day Internationals is struggling to fix his place in the Test team. In 2013, when one legend of game, Sachin Tendulkar ended his 24 years long career, an extremely talented batsman made his way to Test cricket with two centuries in his first two Test matches. Yes, we are talking about Rohit Sharma who undoubtedly is the best in the 50 over format, but even after two consecutive centuries, he failed to permanent his place in Indian Test team till now.

It has been six years now since he made debut in Test Internationals, but his stats have been lackluster. Since 2013, the right-hand batsman has represented India in the longest format on 27 occasions and scored 1585 runs at an average of 39.6 which does not portray his potential and capabilities.

After having a dream run in recently concluded World Cup 2019, Hitman was included in the 15-member squad Indian Test squad for West Indies series. All of his fans were expecting him to be the part of playing XI in the two Match Test series as in the only warm-up game, that India played in West Indies before the series, Rohit Sharma looked good for his fifty. But, the Indian team management and skipper considered young, Hanuma Vihari ahead of him who grabbed on the opportunity with both hands.

The 25-year-old right-hand batsman was the leading run-scorer (289) of the series and one of the two batsmen who scored a century in the series. In the first Test match played at Antigua, he fell short by seven runs to get his maiden Test century, but he completed that unfinished task in the second match at Jamaica after scoring 111 runs in the first innings.

Now, the only question that comes in almost every cricket fan is Hanuma Vihari’s dazzling performances mark the end of Rohit Sharma’s Test career? Although Hanuma Vihari is still new to Test cricket as till now he has only played six Test matches, but he has been more preference over other players. On the other hand, no doubt Rohit is a rare talent in white-ball cricket, but somewhere his technique and patience have been major snag in his Test downplay.

Most of the times, it was seen that 32-year-old batsman loses his calm and plays an ordinary shot and gifts his wicket to the opposition. Whereas, Vihari’s temperament fits well to the longest format of the game. Till now, Andra Pradesh born right-hand batsman has played 6 Test matches for India in which he has one century and three half-centuries to his name.

Besides, Lokesh Rahul everyone in the team has delivered some promising performances recently. Although Rohit Sharma records have been prolific while opening the innings in one-day Internationals but there are minimal chances that he will get an opportunity to open the innings in the longest format of the game. Currently being 32, the selectors might not take risk with him because there are various other contenders for that place who have proved themselves time and again. Prithvi Shaw is one of them, who will make a comeback to cricket in November and will probably get chance.

So, seeing the emergence of such young talent in Indian cricket, Rohit Sharma’s Test career is looking under dark as the selectors will give first preference to the players who are young and energetic. Let’s see what happens when the selectors will announce the team for upcoming India vs. South Africa series.