Is Faf du Plessis exclusion from upcoming T20 series an end to his T20I career? 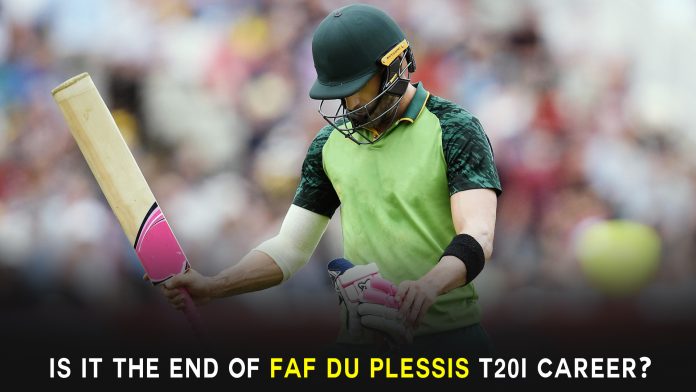 One unexpected event can hamper the career of even the best in the business. South Africa’s World Cup 2019 had been a nightmare where the team only managed to win three out of nine games. Since then, the Proteas are going through a tremendous transformation, and the team management has taken some tough calls ahead of upcoming T20 series with India.

Quinton de Kock has been handed over the responsibility to lead the team in the series. Meanwhile, the selectors ignored a big name, Faf du Plessis for the three-match T20 series. He has given some exceptional performances for his IPL Franchise over the years. Although playing for IPL team and national team are entirely different, but the technique and class of the player remain the same wherever he plays.

The omission of Faf du Plessis from the squad is a big question mark on his career. Going with a mixture of experienced and inexperienced players in the series is the indication that South African selectors are taking T20 World Cup into consideration that is scheduled to be held in Australia from October 18 to November 15, 2020. If that is the case, then most probably Faf du Plessis has to dig deep and think about his T20 International career.

Although Faf du Plessis T20 records for the national side are remarkable, till now in 44 T20 games for South Africa in which he has gathered 1363 runs. Apart from this, he holds the record of highest individual T20 score (119) for South Africa. He achieved this feat in 2015 against West Indies when he surpassed Richard Levi 117*.

Despite this, age is playing a spoiler game for the veteran South African batsman. T20 is the fastest format of the game; it demands double energy, athleticism and physical strength on the field.  Faf is 35 right now, and by 2020 he will be 36, and physical strength, intensity starts to get hindered with age.

In 2018, former South Africa T20 skipper, Plessis revealed that the 2020 World T20 in Australia would be his last. He has led South Africa in two World T20Is – in 2014 and 2016. But, the scenario has changed completely. The nature of the T20 format is such that keeps bringing in fresh talent and offer them opportunities, but at the same time, the frequent introduction of young talent prevents a team from playing their best outfits.

In the recent 2 years, South Africa has got some young talent in the form of Rassie van der Dussen, Temba Bavuma, Andile Phehlukwayo, etc. and introduction of new players like Junior Dala, Bjorn Fortuin and Anrich Nortje will give enough time to South African selectors to get the best lot for the T20 World Cup 2020.