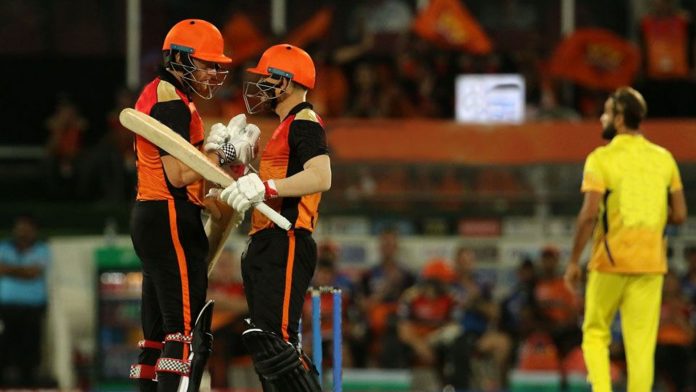 In the absence of MS Dhoni, Suresh Raina was given the responsibility to lead the side. By keeping in mind Hyderabad’s inability to chase the target in their previous matches, Chennai Super King’s skipper after winning the toss elected to bat first. But due to Chennai’s batsmen inability to strike the ball well in the match, Chennai only managed to put 132 runs in their quota of 20 overs. When Hyderabad came to chase the target, then, due to brilliant innings by their openers, Hyderabad won the match by 6 wickets with 19 balls left. Chennai Super kings is still at 1st spot in the points table with seven wins whereas Sunrisers Hyderabad are at 5th spot with four wins in the eight matches they played yet.

For Chennai super kings, South African skipper, FaF Du Plessis was the highest run score. He scored 45 runs in 31 balls. Other than him, only Shane Watson crossed the 30 runs mark. He scored 31 runs in 29 balls at a very low strike rate.

For Hyderabad, David Warner scored 50 runs in 25 balls and Jonny Bairstow scored unbeaten 61 runs. Other than them, no other batsmen looked in any sort of form.

For Chennai Super Kings, leg spinner Imran Tahir was the stand out bowler. In his quota of 4 overs, he conceded 20 runs and took 2 wickets. Other than him, only Ravindra Jadeja bowled well, but was not able to take any wicket. Rest of the Chennai bowlers conceded runs at an economy rate more than 10.

Talking about Sunrisers Hyderabad, Afghanistan leg spinner, Rashid Khan was the stand out bowler. In his quota of four overs, he conceded 17 runs and took 2 crucial wickets of Chennai Skipper, Suresh Raina and right-handed batsman, Kedar Jadhav. Other than him, all other bowlers also bowled brilliantly.

Sunrisers Opener, David Warner was named Player of the match for his brilliant batting performance.

Follow MyTeam11 for more information and updates about the sports stuff