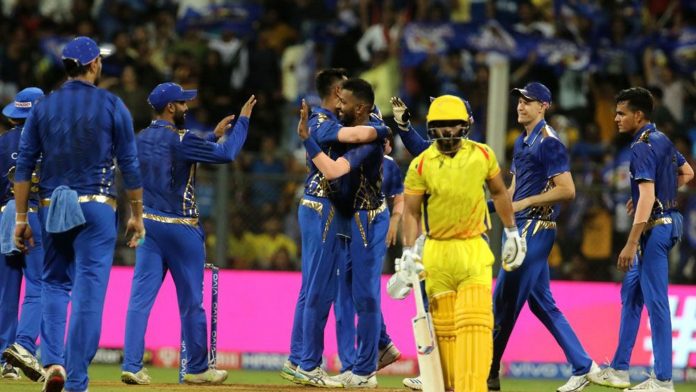 Mumbai Indians comprehensively defeated the arch rivals, Chennai Super Kings in their own backyard in the 44th match of the on-going IPL season. Read on to know more about the full match details.

In the absence of MS Dhoni, left-handed batsman, Suresh Raina was given the responsibility to lead the team. After winning the toss, the Chennai skipper elected to field first. With only 228 runs in the bag this year, the Mumbai Indians skipper, Rohit Sharma showed his masterclass in tough conditions. Along with, Evin Lewis, the MI captain added 75 runs for the second wicket to help his team to get some momentum. In the pitch where other batsmen struggled to get going, Rohit Sharma drilled in and scored 67 runs off 48 balls. CSK’s spin twins, Harbhajan Singh and Imran Tahir who unsettled even the best batsmen on the Chepauk track were no match for Rohit Sharma’s attack, who got his team to a good total. In the death overs of the innings, the younger Pandya brother who had played some exceptional knocks for his team in almost every game he got the opportunity to bat. He did the same this match. After the 18 overs, the visitors were at the score of 128 and then Hardik Pandya came and took Mumbai beyond 150 runs.

Without Dhoni, Chennai Super Kings batting line up looks weak and once again the team proved this in the match. In response to the chase, Chennai Super Kings lost 3 wickets in the power play overs including the huge wicket of former Australian opener, Shane Watson who scored brilliant 96 runs in the previous match against Sunrisers Hyderabad. CSK only managed to get 109 runs in 17.4 overs as none of their batsmen looked in touch. At the end, the mighty Mumbai Indians registered a comprehensive victory by 46 runs to get themselves to a place above in the points table.

For Mumbai Indians, the skipper Rohit Sharma brought up his first half century of the season. He scored 67 runs off 48 balls with the help of six fours and three big hits. Hardik Pandya’s cameo (23 runs off 18 balls) in the death over of the innings, turned the match in Mumbai favor.

Playing his first match of the season, Murali Vijay looked in great touch in the match. He is the only batsman to score cross the 30 run mark. He scored 38 runs off 35 balls.

Left arm spinner, Mitchell Santner was the standout bowler for CSK with the figures of 2/13 in his four overs spell. Imran Tahir and Deepak Chahar picked one wicket each. Other than this, former Indian off spinner, Harbhajan Singh conceded less runs but didn’t managed to get any wicket.

Talking about bowling performance of Mumbai Indians, the veteran bowler, Lasith Malinga completely injured the Chennai batting up. He picked up four wickets in 3.4 overs. Krunal Pandya and Jasprit Bumrah supported him and took 2 wickets each. The debutant, Anukul Roy took 1 wicket in his 2 over spell.

Mumbai Indians skipper, Rohit Sharma was named ‘Player of the match’ for his sensational batting performance.