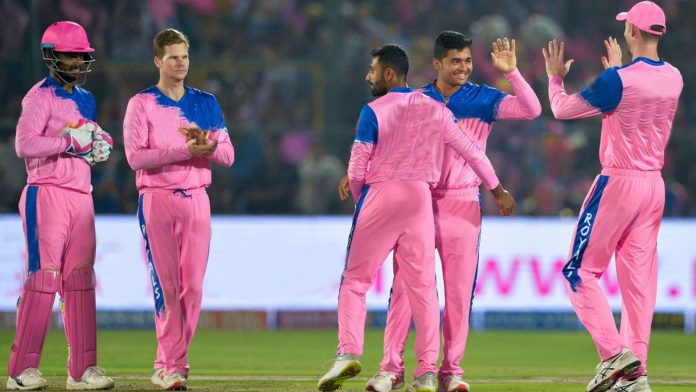 Rajasthan Royals’ skipper, Steve Smith, won the toss and elected to bowl first. In spite of brilliant bowling display by Rajasthan Royals in the first 10 overs of the innings, the host managed to get 175 runs, thanks to the sensational knock by the skipper, Dinesh Karthik. After the loss of 2 wickets at 31, Karthik rebuilt the innings and ended with unbeaten 97, with the help of seven fours and nine massive sixes. In the second last over of the innings bowled by Jofra Archer, he took off 16 runs followed by 18 runs of the last over bowled by left arm pacer, Jaydev Unadkat. Along with Rinku Singh, the skipper added 44 runs for the seventh wicket. With this innings, Dinesh Karthik bagged up his 19th IPL fifty.

In the chase, the visitors got off to a flying start, thanks to Ajinkya Rahane and young Sanju Samson. In 5.3 overs, both of them added 53 runs to the team’s total before Kolkata spinner, Sunil Narine trapped Ajinkya Rahane infront of wicket. In the next over, leg spinner Piyush Chawla, clean bowled Rahane’s opening partner, Sanju Samson at the score of 22 runs. Both the Kolkata’s spinners were impressive with their bowling. Rajasthan Royals’ skipper Steve Smith and all-rounder Ben Stokes found it tough to score runs before Sunil Narine and Piyush Chawla. Before getting dismissed them in the eighth and tenth over of the innings, respectively. After this, young Riyan Parag played a worth remembering knock (47 runs off 37 balls) setting up Rajasthan Royals’ to a three-wicket win. Along with him, Jofra Archer’s blistering performance at the end (27 runs of 12 balls) was also turned the fortunes for Rajasthan.

With this win, Rajasthan Royals pushed themselves a place above in the points table. Whereas Kolkata Knight Riders has put themselves in trouble now with only 4 wins in 11 matches they have played till now.

Kolkata Knight Riders ‘spin attack troubled the Rajasthan Royals’ batting line up in the initial 12 overs of the match. But, 17 years old Riyan Parag looked in great touch in the match. His 47 runs innings made a huge contribution towards Rajasthan’s victory. Other than him, Jofra Archer blasted at Kolkata’s bowlers in the death overs of the innings.

For Rajasthan, Varun Aaron playing his first match of the season finished at 2/20 in his four-over spell. Osane Thomas, Shreyas Gopal, and Jaydev Unadkat took 1 wicket each.

Indian medium pacer, Varun Aaron was adjudged as the ‘Player of the match’ award for his outstanding bowling display.