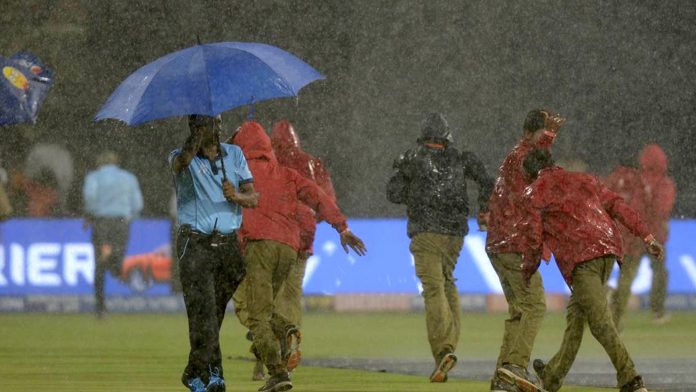 After the delayed start in the most crucial contest, Rajasthan Royals was aiming for their 6th victory of the season to keep themselves alive in the playoff race. But the match was eventually called off due to the rains, as a result of which, the points were distributed evenly to both the teams. Before the beginning of the match, Rajasthan Royals’ captain, Steve Smith, won the toss and elected to field. After a lengthy rain delay, the match was cut off to 5 overs. Royal Challengers Bangalore skipper, Virat Kohli, along with South African batsman, AB de Villiers, got his team to a flying start and dispatched the first ball of the match for a massive long-off for six. Virat Kohli went on to score 25 runs in just 6 balls before he was dismissed by Shreyas Gopal.

Before Royal Challengers Bangalore could go far ahead in the match, Rajasthan Royals’ leg spinner, Shreyas Gopal, claimed the second hat-trick of this season. In the first three deliveries of his spell, he gave away 12 runs, but in the final three deliveries, he sent Virat Kohli, AB de Villiers, and Marcus Stoinis back to the pavilion.  The first hat-trick of the season was taken by Kings XI Punjab all-rounder, Sam Curran, against Delhi Capitals. Finally, RCB managed to get 62 runs in 5 overs.

In response, Rajasthan Royals openers, Sanju Samson and Liam Livingstone, started the chase in a blazing manner. In the three overs, both of them added 40 runs. Rajasthan Royals needed 23 runs during the final two overs before the rain gods ruined the thrilling game and hindered their chances of play-offs qualification.

After the rain washed out the match, though Royal Challengers Bangalore are now out of the tournament, Rajasthan Royals are still in the race, but their chances will depend on the results of the other team’s matches and mathematical calculations. The rest, only time will tell.

Till then, follow MyTeam11 for more information and updates about the latest sports stuff.