IPL 2019: Punjab beat Rajasthan to win their 5th match of this season 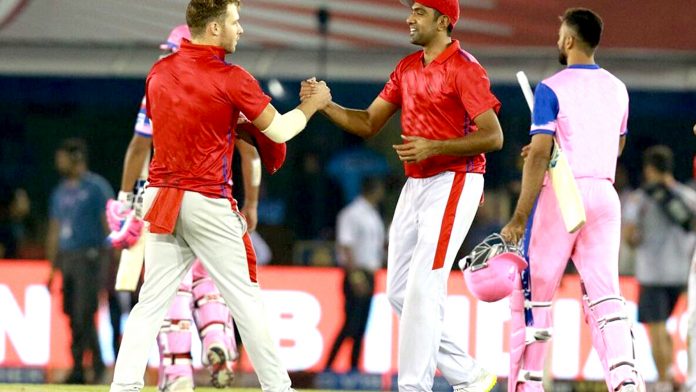 The 32nd match of IPL 2019 was played between Kings XI Punjab and Rajasthan Royals at Punjab cricket association stadium, Mohali. The Kings XI Punjab team won the game by 12 runs. With this victory, now Punjab has 5 wins out of 9 matches and are at 4th spot in the points table whereas Rajasthan Royals faced sixth defeat in eight games they played and are at seventh position in the table currently.

Story of the match

Rajasthan Royals skipper, Ajinkya Rahane after winning the toss elected to field first. In response Kings XI Punjab got off to a slow start and lost the wicket of Chris Gayle within the power play overs. Lokesh Rahul was also not looking in his prime form and made 52 runs in 47 balls. But due to David Miller’s 40 runs knock and skipper R. Ashwin’s cameo of 17 runs in just 4 balls helped Punjab to reach a good total of 182 runs. Jofra Archer was the stand out bowler for Rajasthan in the match who picked up 3 wickets and conceded only 15 runs in his quota of four overs.

When Rajasthan came to chase, everyone was hoping to see the faceoff between Jos Buttler and R. Ashwin due to the ‘Mankading’ incidence. But, that did not happen, debutant Arshdeep Singh dismissed Joss Buttler in the 4th over of their innings. After his dismissal, the chase became tough for Rajasthan because of the inexperience in their batting line up. Stuart binny’s blistering knock of 33 runs gave Rajasthan some hope towards the end of the innings. But only one or two players can not make the team win the match. For Punjab, skipper R. Ashwin and medium pacer Mohammad Shami took 2 wickets each. R. Ashwin was named ‘Player of the match’ for his brilliant all-round performance.

Follow MyTeam11 for more information and updates about the sports stuff.