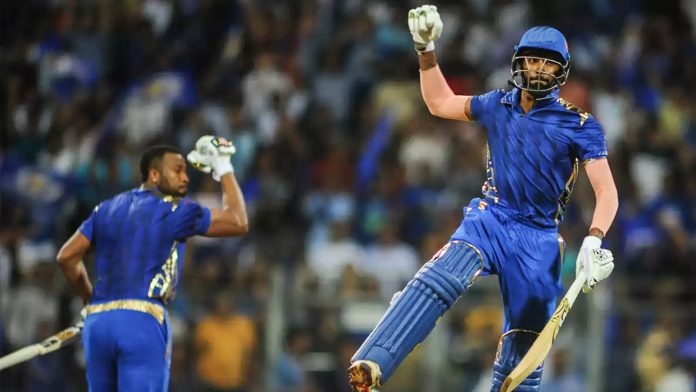 The Super Over Chase

The 51st match played between Mumbai Indians and Sunrisers Hyderabad at Wankhede went to the wire. Sunrisers Hyderabad displayed brilliant performance, but at the end couldn’t stop the mighty Mumbai Indians to get into playoffs. Manish Pandey’s last ball six took the game to super over. But death over specialist, Jasprit Bumrah once again showed why he is considered the best in the world. He bowled the Super over for Mumbai in which he conceded only 8 runs and took 1 wicket. In response to the super over the chase, Mumbai Indians reached the target in only 3 balls.

Earlier, before the commencement of the match, Mumbai Indians skipper, Rohit Sharma won the toss and elected to bat first. Rohit Sharma has not looked in great touch this season, in this match also Khaleel Ahmad dismissed him within the power play overs. MI could still afford to breathe easy with the likes of the Pandya brothers and Pollard to come, but none of them looked in touch. Now all the responsibility was on Quinton de Kock, who came to open the innings with Rohit Sharma. Although he was not finding it easy to strike the ball, he somehow managed to score 69 runs to help his side to reach a respectful total of 162.

Sunrisers Hyderabad‘s new opening pair, Martin Guptill and Wridhhiman Saha gave them a flying start after scoring 40 runs within 4 overs before Jasprit Bumrah sent Wriddhiman Saha back to pavilion at the score of 25. After this, Mumbai Indians spinners came and bowled brilliantly. Sunrisers Hyderabad skipper, Kane Williamson, and middle-order batsman, Manish Pandey were finding it difficult to hit both spinners as the result of which the run rate spiked up in the middle overs. Although Chahar didn’t get the wicket he managed to keep the pressure that helped Krunal to get a wicket. He sent Kane Williamson and Vijay Shankar back to the pavilion. Now, due to lack of experience, Manish Pandey was SRH’s last hope. With 7 needed off the last ball, Manish Pandey managed to hit the ball for six to take the match to super over.

After the outstanding all-round performance in the super over, Mumbai Indians became the third team to qualify for playoffs.