IPL 2019: Mumbai Indians surge to the top spot after a competitive win against Kolkata Knight Riders 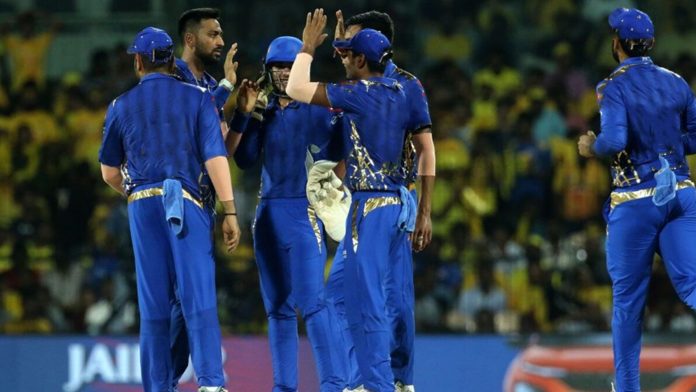 IPL 2019: Mumbai Indians surge to the top spot after a competitive win against Kolkata Knight Riders

Kolkata Knight Riders were knocked out at Wankhede stadium by the Mumbai Indians in the final league stage match, leaving the Top 4 slot reserved for Sunrisers Hyderabad. Read on to know more!

Mumbai Indians defeated Kolkata Knight Riders in the final league stage match at Wankhede stadium by nine wickets. With this win, Mumbai Indians placed themselves at the top spot in the points table, whereas Kolkata Knight Riders IPL 2019 journey came to an end with this defeat. After qualifying, Sunrisers Hyderabad became the first team to get the playoff ticket with 12 points.

In a must-win game, Kolkata Knight Riders skipper, Dinesh Karthik, lost the toss and was asked to bat first. Kolkata Knight Riders opener, Chris Lynn and Shubman Gill, gave the team a solid start, but Mumbai Indians all-rounder, Hardik Pandya, had something special in store for fans. The all-rounder dismissed both of them in no time to give his team an upper hand. After their wickets, Kolkata batsmen were finding it difficult to strike the ball. Before Kolkata could gain momentum, the veteran bowler, Lasith Malinga, sent Knight Riders skipper, Dinesh Karthik and the most destructive batsman this year, Andre Russell, was back to pavilion at the 13th over of the innings. At the end of the innings, Robin Uthappa’s 40 runs in 47 balls and Nitish Rana’s little cameo (26 runs in 13 balls) helped Kolkata team to earn 133 runs.

When the host came to chase, Quinton de Kock and Rohit Sharma gave the team a good start before medium pacer, Prasidh Krishna, dismissed Kock at the 7th over of the innings. This was the last time when Kolkata looked happy because after this, Mumbai Indians skipper, Rohit Sharma and Suryakumar Yadav, took the team to victory at the 17th over of the innings. Rohit Sharma made his 2nd half-century of the season, after playing unbeaten knock of 55 runs, while Suryakumar Yadav scored 46 runs in 27 balls. After this outstanding performance, the host finished the league stage by securing the top position.

Hardik Pandya was named the ‘Man of the Match’ for his brilliant performance.

With the end of the league stage match, let's see which teams will compete against each other in Qualifier 1 and Eliminator, which is scheduled for 7th and 8th May 2019.

You’ll have to wait for the results of these two matches to know which team will play qualifier 2 and the final. Till then, follow MyTeam11 for more information and updates on the latest happenings in the sports world.