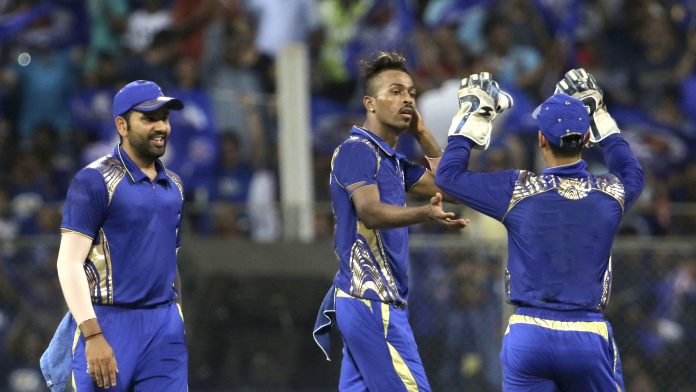 Hardik Pandya’s cameo along with Rahul Chahar and Jasprit Bumrah’s brilliant bowling effort helped Mumbai Indians to register their 6th win of the season to displace Delhi Capitals and move to 2nd spot in the points table.

Mumbai Indians skipper, Rohit Sharma, elected to bat first after winning the toss. In response, Rohit Sharma and Quinton De Kock gave Mumbai a solid start with 57 runs in 6 overs. But, the Delhi team bounced back strongly and put Mumbai team on backfoot by picking their three quick wickets. In spite of this, Mumbai Indians managed to get a competitive total of 168 runs, due to brilliant knocks by Pandya Brothers. In response when Delhi capitals came to chase the target, Shikhar Dhawan and Prithvi Shaw gave them a good start before the dismissal of Shikhar Dhawan in the 7th over of the innings. After this, Delhi completely lost the momentum and managed to score only 128 runs in their quota of 20 overs and lost the match by 40 runs. After this loss, Delhi came to 3rd spot in the points table with 5 wins in 9 games they have played. On the other hand, Mumbai Indians pushed themselves to 2nd spot with 6 wins in 9 matches.

For Mumbai Indians, their openers, Rohit Sharma and Quinton De Kock, played well. Rohit Sharma scored 30 runs, while De Kock scored 35 runs. Besides them, Pandya Brothers stole the show at the end of the innings. Hardik Pandya made 32 runs in just 15 balls, while his brother Krunal Pandya played a responsible inning of 37 runs.

Talking about Delhi Capitals, only Shikhar Dhawan managed to pass the 30 run score. He scored 35 runs. Other than Dhawan, only Axar Patel scored 26 runs.

For Delhi Capitals, South African pacer, Kagiso Rabada, took 2 wickets in his quota of 4 overs. He is currently the purple cap holder with 19 wickets in 9 matches he has played yet. The leg spinner, Amit Mishra and left-arm spinner, while Axar Patel took 1 wicket each.

For Mumbai Indians, spinner, Rahul Chahar, was the standout bowler. In his quota of four overs, he conceded 19 runs and took 3 wickets. He got excellent support from Jasprit Bumrah, who took 2 wickets and conceded only 18 runs in his 4 overs spell. Moreover, Pandya Brothers and Lasith Malinga took 1 wicket each.

25 years old all-rounder, Hardik Pandya, was named Player of the Match because of his all-round performance.

Follow MyTeam11 for more information and updates about the sports stuff.