IPL 2019: Kolkata Knight Riders keep themselves in the race after defeating Punjab by 7 wickets 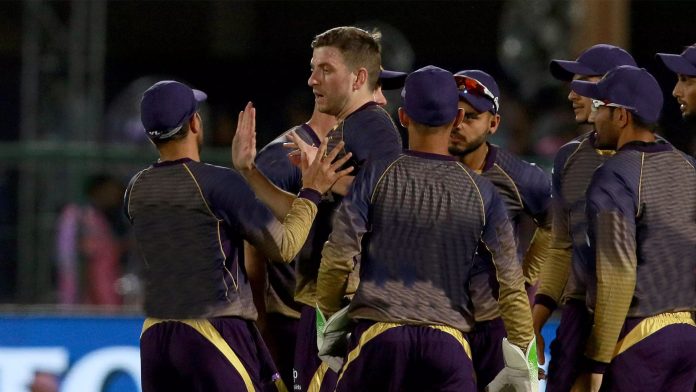 After successfully chasing the target of 184 runs, the Kolkata Knight Riders move themselves one step closer to playoffs. Before the starting of the match, Kolkata Knight Riders ‘skipper, Dinesh Karthik won the toss and asked Kings XI Punjab to bat first. In the initial overs, Kolkata Knight Riders bowlers supported their skippers’ decision and dismissed the backbone of Punjab batting line up, Chris Gayle and KL Rahul within 5 overs. But after this, Nicolas Pooran (48 off 27) and Mayank Agarwal (36 off 26) revived the innings following the initial over destruction. Besides this, all-rounder Sam Curran played a cameo at the end of the innings. He scored 55 runs off 24 balls to bring his maiden IPL half-century. Due to outstanding batting display by the all-rounder, Kings XI Punjab stole 32 runs from final two overs bowled by Andre Russell and Harry Gurney, reaching 183 runs in their 20 overs.

For Kolkata, Sandeep Warrier took 2 wickets in his four-over spell while Andre Russell and Nitish Rana picked one wicket each.

In response to the chase, young Shubman Gill anchored the chase with unbeaten 65 off 49 balls. For the first wicket, he along with Chris Lynn added 62 runs before Andrew Tye sent Chris Lynn back to the pavilion at the score of 46 in the last over of the power play. After this, the young batsman got support from Robin Uthappa and Andre Russell. Robin Uthappa scored 22 off 14 balls and Andre Russell with the score of 24 off 14 proved to be handy for Kolkata. Apart from them, the skipper Dinesh Karthik, with his extraordinary performance helped the Kolkata Knight Riders chase the target with 2 overs left.

For Kings XI Punjab, R Ashwin, Mohammad Shami, and Andrew Tye took 1 wicket each, but that was not enough to win the match.

Shubman Gill was named ‘Player of the match’ for his outstanding knock of 65 runs.

After this loss, play-off chances for Kings XI Punjab have vanished. They now have one match left, even if they win the match, their chances are minimal.

Talking about Kolkata Knight Riders, after this comprehensive victory they inch one step closer to play-offs. Now they will play their last match against Mumbai Indians at Wankhede with the aim of winning the match. Rest the time will tell.

Till then, follow MyTeam11 for more information and updates about the latest happenings in the sports world.