IPL 2019: Four teams in the race for the two Play-offs spot 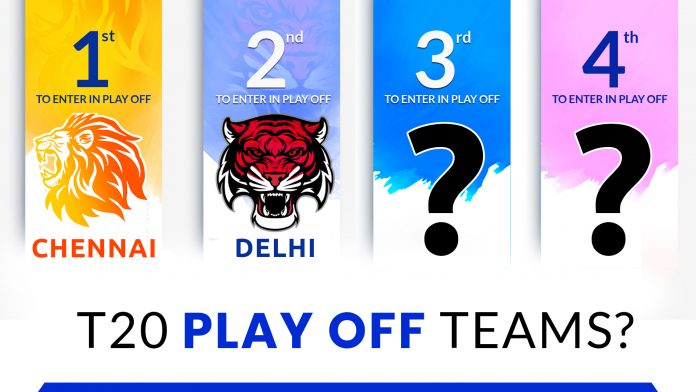 Chennai Super Kings and Delhi Capitals are the two teams that have secured their place in the top 4. But, the race is still on among Sunrisers Hyderabad, Kings XI Punjab, Mumbai Indians and Kolkata Knight Riders for the other two spots.

Let’s have a look at the possibilities of qualifying for playoffs for all four teams.

Among these four teams, most probably Mumbai Indians will be the third team to qualify because they have 14 points in their account with two matches left against Hyderabad and Kolkata, and both matches will scheduled to be played at Wankhede stadium. They have to win only 1 match to qualify for playoffs, but the team will be aiming to win both the matches to finish amongst the top 2 to get an extra advantage.

2018 season’s runners up, Sunrisers Hyderabad is at 4th spot in the points table currently. In 12 matches they have played yet, they have won 6 matches and lost 6 matches. The team will play the rest two matches against Mumbai and Bangalore after flying to their home ground. In the absence of David Warner, whose IPL campaign has already ended, the team will face some problems.

If Hyderabad defeats both the teams, then automatically they will automatically make it to Top 4. But if they only win one match, then it will be all depend on mathematical calculations and matches between other teams.

Kolkata’s Knight Riders ‘performance has not been up to the level, the fans expected from them. They started their season well, but during the middle phase of the league stages, they completely lost the momentum and lost 6 consecutive matches. They have only won 5 matches in this so far with two matches left. Their final two matches are against Kings XI Punjab and Mumbai Indians.

Now if they win both the matches, then, automatically Kings XI Punjab will get eliminated. But if Kolkata Knight Riders manage to win only one match, then their chances will also get hindered.

The rest time will tell, let’s see who will be other two teams to qualify for Playoffs.