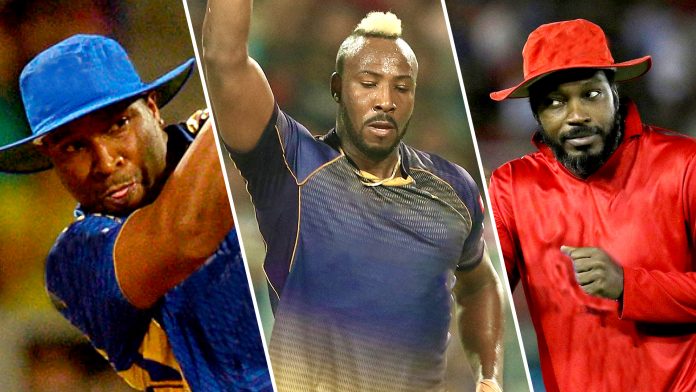 T20 cricket is always considered the format of fours and sixes. Like every year, West Indies power hitters are enlightening this IPL season with their prominent batting display. Their magical performances are winning the hearts of cricket fans across the world. If Virat Kohli can be named as ‘run machine’ then 30 years old all-rounder from Jamaica, Andre Russell can be called ‘hit machine’ with the kind of form he is in.

Andre Russell has become a nightmare for bowlers this season. In seven innings he batted for Kolkata, he has hit 30 sixes and scored 312 runs at the tremendous strike rate of 213.69. After him, Kings XI Punjab opener, Christopher Henry Gayle is at number 2 position with 26 sixes in his account. Famously known as the ‘Universal Boss,’ he has scored 352 runs at the strike rate of 155.06 in 8 matches he played so far. He has always made it to the list of most sixes whether it is for his national team or in any other leagues. He is currently leading in the list of most sixes in IPL history with 318 sixes in his bag.

Another West Indies aggressive middle-order batsman, Kieron Pollard is at 4th spot in the list, thanks to his brilliant Knock against Kings XI Punjab in the 24th match of the season. In the eight games he played for Mumbai Indians yet, he managed to clear the ropes 17 times. Pollard has scored 185 runs yet at the strike rate of 177.88.

Follow MyTeam11 for more information and updates about cricket and upcoming fixtures.