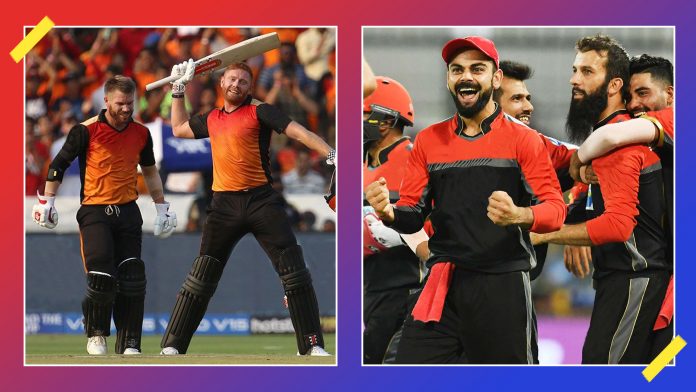 David Warner and Jonny Bairstow’s brilliant opening stand against Kolkata Knight Riders and Bangalore keeper batsman Parthiv Patel‘s throw in the last ball against Chennai super kings was the most thrilling and exciting moment of the Super Sunday.

The first match of the Super Sunday was played between Sunrisers Hyderabad and Kolkata Knight Riders at Rajiv Gandhi international stadium, Hyderabad. Sunrisers skipper Kane Williamson won the toss and elected to bowl first. But Chris Lynn and Sunil Narine gave Kolkata a flying start before Hyderabad left-arm pacer, Khaleel Ahmad dismissed Sunil Narine. After this, Kolkata lost the momentum and only managed to put 159 runs in their quota of 20 overs. After this, Sunrisers opener, David Warner and Jonny Bairstow stole the show. They both have added 131 runs in 12.2 overs which made Hyderabad register an easy victory in 15 overs only.

The second match of the Super Sunday can be considered as the most thrilling match of this season till now. Chennai Super Kings skipper, MS Dhoni, after winning the toss asked the home team to bat first. His bowlers supported his decision and dismissed the backbone of Royal Challengers Bangalore, Virat Kohli, and AB De Villiers within 7 overs. After their wicket, Chennai super kings pushed Bangalore on the back foot. But somehow, RCB managed to put 161 runs on the board. Although it was looking that Chennai Super Kings will easily chase the target with the kind of batting line up they have, but Royal Challengers Bangalore bowlers had something special in store. Chennai super kings lost 4 wickets within 6 overs with only 28 runs in their account. After this, the chase became tough for Chennai, but skipper MS Dhoni took the match to the last ball of the innings. But at the end, Royal Challengers Bangalore won the match by 1 run.

Talking about the second match, for Royal Challengers Bangalore left-handed batsman, Parthiv Patel was the standout performer after scoring 53 runs. For Chennai Super Kings, skipper MS Dhoni played a flashy innings of 84 runs, but that wasn’t enough to take his team to victory.

In the first match, Sunrisers Hyderabad's left-arm pacer, Khaleel Ahmed was the standout bowler in the match with figures of 3/33 in his quota of 4 overs. Other than him, his teammate Bhuvneshwar Kumar took 2 wickets.

In the first match, Khaleel Ahmed was named Player of the match.

Follow MyTeam11 for more information and updates about sports stuff.