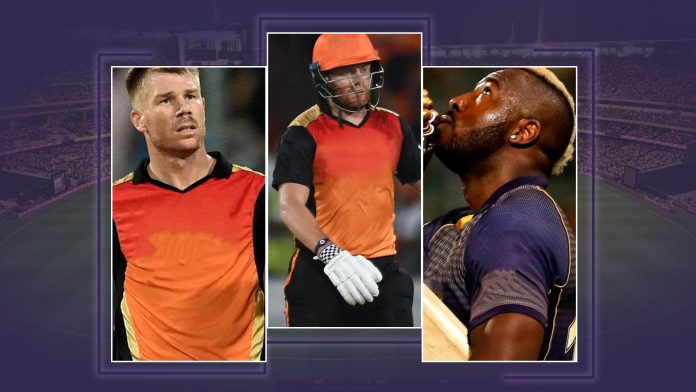 Sunrisers Hyderabad left-handed opener David Warner is currently leading in the list of most runs scored till now. In the 12 matches he has played this season, he has scored 692 runs at an average of 69.20, with the highest score of unbeaten hundred against Royal Challengers Bangalore in the 11th match of this season. His 2019 IPL campaign ended after the match against Kings XI Punjab.

When T20 cricket is talked about, then, an image of a batsman hitting huge sixes comes in the mind of people. Kolkata Knight Riders all-rounder, Andre Russell is leading at the top in the list of most sixes hit by any batsman so far. He became the first batsman to hit 50 sixes in a single IPL season. Kolkata Knight Riders still have matches left so the big man will be aiming to hit more.

Five centuries have been made this year till now with 10 matches left in the league stage. Rajasthan’s young batsman, Sanju Samson, Sunrisers Hyderabad openers David Warner and Jonny Bairstow, Bangalore’s skipper, Virat Kohli and former Rajasthan Captain Ajinkya Rahane are the five players in the list. England keeper batsman, Jonny Bairstow’s 114 runs in just 56 balls is the highest individual score of this year’s IPL season yet. He scored this century in the 11th match of the season, played between Sunrisers Hyderabad and Royal Challengers Bangalore. This was his maiden IPL century.

T20 cricket is all about strike rate, players who have the capability to score fast runs and hit the ball to a far distance, gets appraisal here. So far, we have seen various batsman who scored fast runs, but Kolkata Knight Riders all-rounder, Andre Russell has the best strike rate till now. In 11 innings he came to bat, he has hit the ball at massive strike rate of 207.69.

T20 cricket is not only about hitting huge sixes. A batsman can score fast runs by hitting more number of boundaries. Australian aggressive opener, David Warner is leading in the list of hitting most fours. In the 12 matches he has played for Hyderabad this season, he made the ball travel to the boundary 57 times.

*All the analysis is based on official stats of the on-going IPL season, last collected on 29th April 2019.

Follow MyTeam11 for more information and updates about the latest happening in the Sports world.