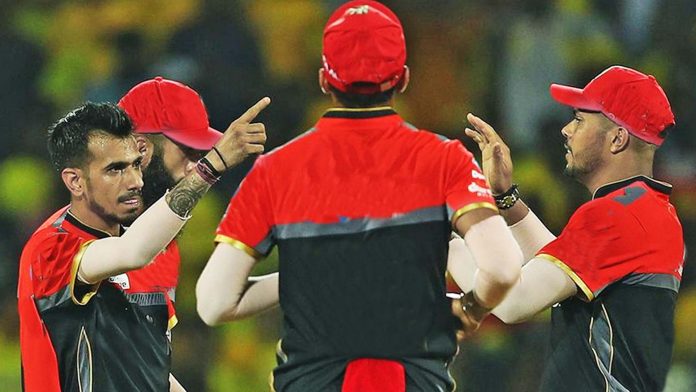 After winning the toss, Kings XI Punjab skipper R. Ashwin, elected to bowl first. But even after losing Virat Kohli in the power play overs, RCB got off to a flyer. The reason was Parthiv patel, who smashed seven fours and two sixes in his 24-ball 43. RCB made 70 runs in the power play overs which is the second highest power play total this season. Then, Kings XI skipper‘s exceptional bowling display slowed down the things little bit. He dismissed RCB’s in form middle-order batsman, Moeen Ali, in the eighth over of the innings. From there, things turned in favor of Kings XI Punjab. From 70/1 in power play overs, RCB was stumbled to 99/4 in the 13th over. But, after this downfall Former South African captain, AB de Villiers, exploded at Kings XI Punjab bowlers in the death overs of the innings. The most of the damage was done in the final two overs of the innings where AB de Villiers and Marcus Stoinis seized 49 runs to help RCB reach to another 200 plus total this year.

Like RCB, Kings XI Punjab also started well-off, seeking eyes on victory. Medium Pacer, Umesh Yadav took hold of the dangerous looking Chris Gayle cheaply. Despite of this, Kings XI Punjab took away 68 runs in the power play overs to keep the momentum high. The run flow continued till the 9th over before Marcus Stoinis and Moeen Ali dismissed KL Rahul and Mayank Agarwal which helped Bangalore to make a comeback in the match. After this, Trinidadian keeper batsman, Nicholas Pooran gave RCB a scare with five sixes and one four in his 46 runs innings. But after his dismissal in the second last over, Punjab’s chances of winning the match vanished completely. In the end, RCB won the match by 17 runs to push themselves a place above at the points table with 4 wins in their account.

In the initial overs, Parthiv Patel played a sensational knock of 43 runs in 24 balls. After this, in the middle overs, Kings XI Punjab bowlers managed to keep the batsman quiet. But, in the end AB de Villiers blasted on Punjab bowlers and scored 82 runs off 44 balls to take his team cross the 200 run mark.

Talking about Kings XI Punjab‘s batting performance, in the starting overs KL Rahul and Mayank Agarwal scored 42 and 35 runs respectively, to keep their side alive in the chase. But back to back dismissal of these two players turned the things for Punjab. Nicholas Pooran‘s quick knock of 46 runs gave some hope to Punjab, but at the end that was not enough.

Only Skipper Ravichandran Ashwin managed to keep the Bangalore batsmen quiet. Ashwin finished with figures of 15/1 without conceding any boundaries in his spell.

Right arm medium pacer, Umesh Yadav took 3 wickets in his spell. Other than him, Navdeep Siani held his calm and dismissed 2 batsmen in his quota of four overs.