IPL 2019: 5 Indian players who can make a comeback this season 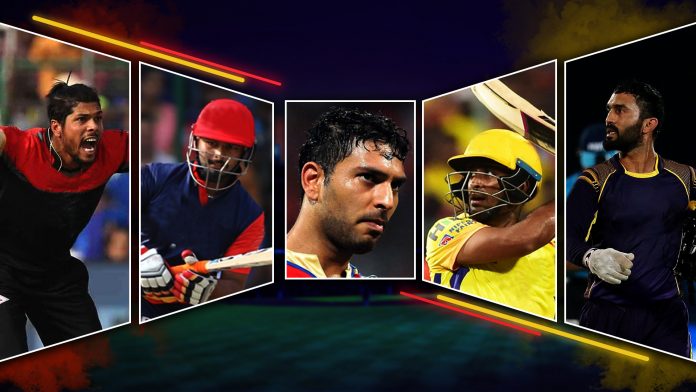 Winners Never Quit, and Quitters Never Win is merely not a saying. Indian Premier League has always given a chance for players to overcome their past performances and improve their game. With hardly three months left to the World Cup 2019, IPL can be a boon for some players who can display their best game on the pitch and secure a spot in the India World Cup Team.

Yuvraj Singh had an extremely disappointing IPL 2018 season. Roped in by Kings XI Punjab at the 2018 auctions, Yuvraj Singh failed to live up to his experience as well as KXIP's expectations. As a result, the ace batsman was released from Kings XI after IPL 2018, and because of his unimpressive outing, he has not been selected in Indian national team.

The IPL journey is not over for Yuvi as he would play for Mumbai Indians this season but, it is still to be seen if he will make it to the playing XI. If the 37-year-old proves to be half as exceptional as he has been in the past performances, then there is no doubt MI will retain him in the next season, and he might also get a spot in WC 2019.

Team India gave Dinesh Karthik opportunities in the playing XI to prove himself ahead of World Cup 2019. But, the final T20I match in India's tour of New Zeland 2019 had placed Dinesh Karthik in a very unfortunate situation. With Dinesh Karthik and Krunal Pandya in the crease, the team needed 16 runs off the final over. Karthik refused to give a single to Krunal in that over, and his overconfidence did not pay him credits as India lost the match.

After the match, Karthik got dropped from India's ODI squad against Australia. The Kolkata Knight Riders franchise has picked Dinesh Karthik as their captain this IPL season. With fewer hopes of entering the World Cup, let us hope that he puts a solid case for World Cup selection through his leadership and batting in IPL 2019.

This 21-year-old wicketkeeper-batsman belongs to Delhi Capitals which is yet to win an IPL trophy. In recent, IND vs. AUS ODI series Pant had a golden opportunity to fill the shoes of the legend MS Dhoni as he got rested for the final two ODIs. He displayed remarkable batting at the 4th ODI, where he scored 36 runs off 24 but, but missed two crucial stumpings in including that of the match winner Ashton Turner.

The high pressure of keeping up to Dhoni's wicket keeping skills seemed to affect Pant on the fifth ODI where he managed to score just 16 runs.

Chennai Super Kings bought the 33-year-old Mumbai Indians batsman for ₹2.2 crores in IPL 2018. Rayudu went on to score the most runs for CSK. The national team gave him the role of being a number-four batsman for team India and Rayudu justified that position until the IND Vs. AUS ODI series. His performance was limited by Zampa’s leg spin and Cummins’ pace attack, and he managed to score just 13, 18 and 2 in the three matches that he played. Hopefully, this shortcoming will be overlooked by World Cup selectors.

Umesh Yadav took 18 wickets in the World Cup 2015 making him India's highest wicket-taker in the tournament and the third highest wicket-taker across teams. The 31-year-old will be playing for Royal Challengers Bangalore this year though his chances of selection into RCB playing XI are uncertain as of now. Yadav was picked for India vs. Australia T20 ODI Series, but because of his poor performance, he was dropped out of the team after the first match. Being an experienced Indian bowler with impressive World Cup track record might give him some extra edge, and might see him recreating the magic, this IPL.