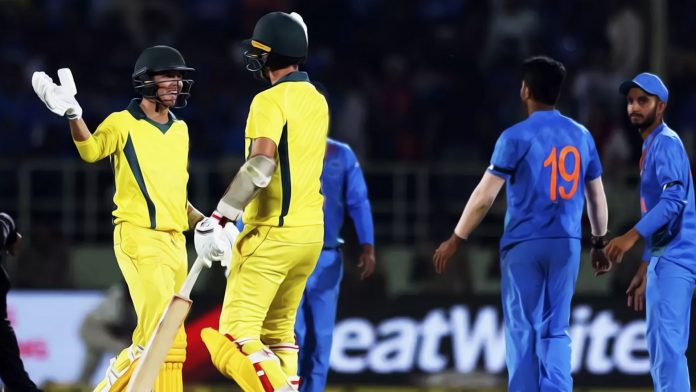 After a terrific defeat at their home-ground, the Aussies are now touring India for yet another series. The first T20I of Australia’s Tour to India held at Visakhapatnam on Sunday was a breath-taking game getting spicier with each bowl being played.

The game kick-started with the Baggy Greens winning the title & opting to bowl first. Well, the tricked worked for the visitors as the hosts failed to showcase a remarkable performance on-field. The Men in Blue wrapped up their innings with a total of 126 runs at a loss of 7 wickets. On the other hand, the Aussies managed to clinch a last-ball victory with a spontaneous boundary from Pat Cummins, defeating India by 3 wickets.

Australia needed 14 runs in the last over of the game which seemed to be a bit difficult for the spectators. But a boundary conceded by Umesh Yadav on the last ball of the over to Pat Cummins turned the tables. The event led to Australia’s victory in the first game of the series.

The next match of the series, comprising 2 T20Is and a 5-game ODI series, is slated to be held on 27th Feb at the M. Chinnaswamy Stadium, Bengaluru. It will be a delight to watch whether the Indian players manage to avenge their defeat or will lose the T20 series to the Aussies.

If you want to stay updated with the latest sports stuff, then stay tuned with MyTeam11.