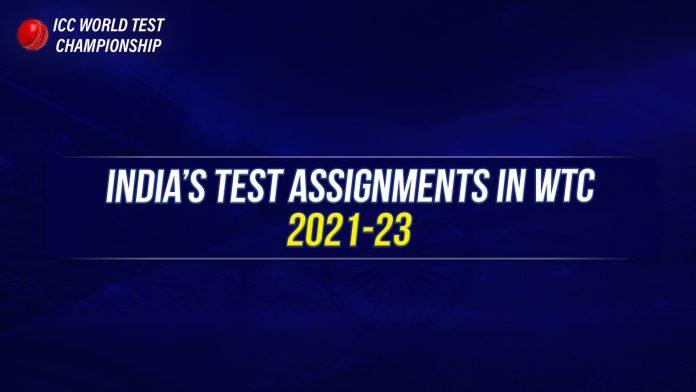 Team India had a great campaign in the first cycle of the World Test Championship. They reached the final after impressive performances. They beat West Indies and Australia in away series and remained undefeated in the home season. Team India will now get ready for another WTC Cycle and this time, the task would be different. It’s going to be a tough cycle and India will look to book another WTC Final in 2023. Every team will play six series, three home and three away. India will play 19 Tests in WTC 2021-23, the second most number of matches in the tournament. Let’s see how India’s schedule has been finalised:

India starts their WTC 2021-23 campaign with a tough task of England and they will play five Tests starting from August 04. India’s previous record in England is giving an edge to hosts and Kohli & Co. would try to find a series win against England. Kohli only won in Australia as captain if we talk about SENA countries.

WTC Winner New Zealand will start their title defense against India in November 2021, just after the T20 WC. It won’t be an easy affair for New Zealand. Team India will look to take a clean sweep in the series, considering their previous form at home.

India’s other tough assignment will be against South Africa. India have never won a series in South Africa and they might break the record this time. Kohli’s side will play three Tests in South Africa’s home summer. Proteas have a slight edge in the series because they have a solid pace-attack and beating them in their own conditions isn’t an easy affair.

Just before the Indian T20 League 2022, India will host Sri Lanka in 3-match Test series. India will play against Sri Lanka for the first time in WTC. India are strong favourites against their neighbors and they might take a clean-sweep in the series.

Border-Gavaskar Trophy will be played around in the next home season of India. It’s going to be a thrilling series between two sides but India are again favourites. India have won the last three-Test series against Australia, including two in Australia.

India will wind up their WTC 2021-23 cycle with an away series against Bangladesh. It will be a tough fight between two Asian sides with their spin attack. Tigers will host India for Two Tests and India are likely to win both games.

Prediction: India are going to play the final one more time in World Test Championship. They might lose the series against England and South Africa’s series will also be a competitive one. They will remain undefeated in the home series.