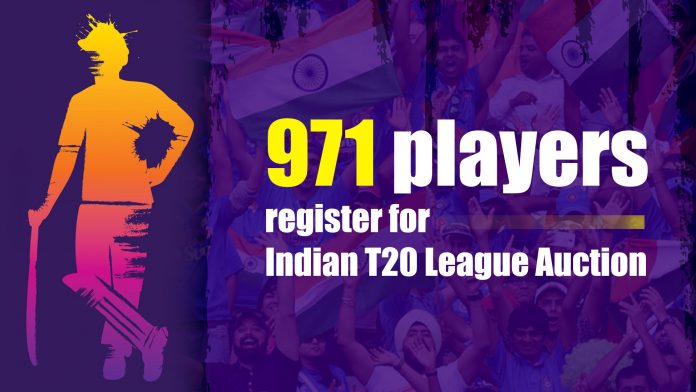 A total number of 971 players have thrown their hat in the ring for the upcoming Indian T20 League auction. The registration closed on 30th November 2019 with 971 players signing to be part of the auction that is scheduled to be held on 19th December 2019 in Kolkata.

Out of these registered candidates, 713 are Indian players and the remaining 258 are overseas players. These registered players will jostle to make the final shortlist, aiming to fill up the available 73 spots across the eight teams.

Ahead of the 2020 season, the list of the registered candidates includes 19 caped Indian players, 64 uncapped Indian players and further 60 players who are yet to make their India debut but have at least played one T20 League match (for instance, Rajasthan Royals' Rahul Tripathi).

Mitchell Starc is one of the players who has removed his name from the 2020 auction, stating the reason that he wants to concentrate more on red ball cricket and wants to be fit for his country. Starc last appeared in the league in 2015 when he represented Royal Challengers Bangalore. Another notable absentee from the list is England’s Test captain Joe Root.

On the other hand, Glenn Maxwell and Chris Lynn are among seven players who have registered themselves into the auction pool. Both the players have set their base price at the maximum of INR 2 crore (approx. USD 279,000).

Here is the country-wise breakdown of the 258 overseas players who will go under the hammer:

Also Read: WHO IS PRIYAM GARG? – KNOW EVERYTHING ABOUT INDIA U-19 CAPTAIN

The franchises are supposed to shortlist the players from the pool of registered candidates and submit the names for the auction before the 5 PM (IST) deadline on December 9.