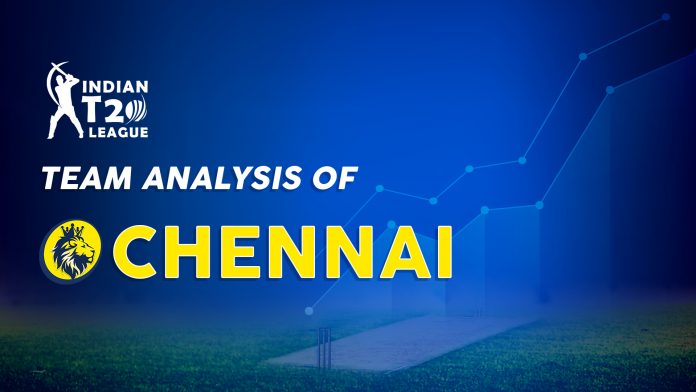 Chennai is the most successful franchise after Mumbai and won three titles in Indian T20 League. They have the record of playing most finals in the Indian T20 League. The franchise missed playoffs only once and it happened in 2020. After a debacle in 2020, Chennai would look to come back strong in 2021. Chennai have the compact side and they have a pool of quality Indian players along with overseas match-winners. MS Dhoni will lead the side for one more season and Suresh Raina will also be back in the squad after missing out the last season. Sahne Watson announced retirement after the 2020 season so Chennai will show some faith on their Indian batch.

Chennai would forget the previous season. They finished seventh in the table, thanks to a couple of victories in the second half. After the ban from Indian T20 League, Chennai won the title in 2018 after beating Hyderabad in the final, courtesy of Watson’s hundred. In the next season, they lost the final by just one run despite a lone effort from Watson. In the last three seasons, their performance has been outstanding.

Chennai needed a big change in the squad after the poor show in 2020 and they invested a big amount on key players. They picked three players from the auction. They went for Moeen Ali for 7 Cr and picked Krishnappa Gowtham for a huge 9.25 Cr. Chennai franchise also showed interest in Indian Test player Pujara for 50 Lakh. Chennai also picked some uncapped Indian talents such as K Bhagath Varma, Hari Nishaanth, and M Harisankar Reddy.

How overseas players stand for Chennai

Overseas players have been the key factors for Chennai in the history of the Indian T20 League. Watson will surely be missed at the top spot and Faf might take this role. Chennai have an experienced overseas squad. Dwayne Bravo suffered an injury two years ago and since then his performance hasn’t been convincing and Chennai picked Moeen Ali as an option of an all-rounder. The current schedule might hurt this idea because Chennai is not playing at Chepauk. Imran Tahir didn’t play much in 2020 but he was the key figure in Chennai’s 2018 title success. On Indian pitches, he might be included in the squad as Harbhajan Singh has been released so responsibility starts from Tahir.

Mitchell Santner is also a vital option on the spinning track. Sam Curran was the emerging star of the previous season by scoring 186 runs and picking 13 wickets. Curran batted in the opening slot so Dhoni can try him in top-order again. Lungi Ngidi and Josh Hazlewood were the two main pacers in the Chennai squad but Hazlewood opted himself out so Chennai can find a bowler for his replacement. Dhoni will try one overseas pacer according to the pitch. If we pick the ideal four overseas players, they will be Faf, Curran, Ngidi, and Moeen Ali. Ngidi will be replaced by Hazlewood later in the tournament and either Tahir or Santner will replace Moeen Ali on slow-tracks.

How the Indian players stand for Chennai

Indian squad is their essential part and Raina’s comeback is already a big boost. Raina was missed at number three last season and he will continue playing at the same spot. Ruturaj Gaikwad opened for Chennai and impressed last season. He will now open with Faf in 2021. Gaikwad played only 6 matches in 2021 and scored 204 runs at an average of 51. Rayudu will bat at number four. Uthappa is also a good option to try in the opening slot if Dhoni sends Plessis in middle-order. Jagadeesan has been impressive in the domestic circuit and might be a good pick to try in the opening slot.

Chennai have various options. To boost the middle-order on turning tracks, Pujara might be a good pick as he can play the sheet-anchor to play crucial overs. Chennai invested 9.25 Cr on Gowtham who would be the good option at down-order but with Jadeja, Dhoni will play according to the surface. Sahrdul Thakur and Deepak Chahar are two pace-options for Chennai. Both have been effective. Chahar bowls three overs in powerplay and Shardul takes the charge in death. KM Asif is also another option in case of injury. Chennai can look for their bench players like Sai Kishore and Karn Sharma.

Weakness of Chennai and how they can overcome these

Chennai’s biggest weakness for the season 2021 is not playing at Chepauk. Dhoni has the idea of delivering success on Indian pitches. He never missed playoffs whenever the Indian T20 League held in India. The experience was the key factor for Chennai in past success but this is also killing their combination. Bravo is out of the form and Faf cannot deliver impact every time.

Dhoni is also missing that power at down-order and Raina has to replicate his past performance which looks slightly tough after not playing so much competitive cricket. Middle-order would be problematic on tough tracks. They have the best bowling attack but balance would be required from both ends. The strike rate was also a big issue for Chennai and Dhoni has to change batting positions. Jadeja would be the first player who should be tried at number 4 or 5.

Chennai have a big disadvantage as they are playing 9 matches in Banglore and Mumbai which are flat tracks and known for producing high-scores. Spin will not be effective there and Chennai have to expect fire from batsmen. They will play four matches in Delhi where they would rely on their pace. They will face Delhi in only matches at Eden. The new schedule hurt them more.