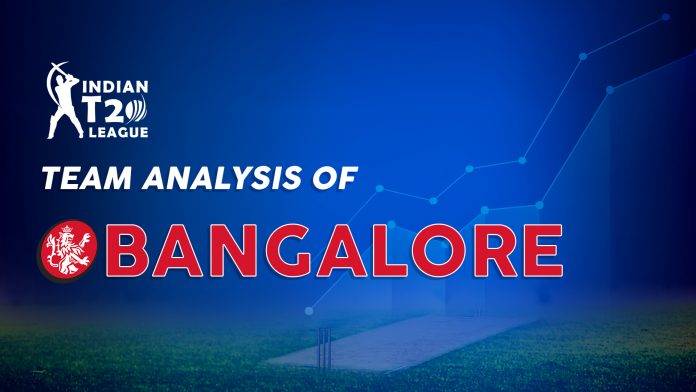 Bangalore’s campaign in the history of the Indian T20 League has been pretty unlucky and they’re set for 2021 season with another hope to clinch the maiden trophy. Bangalore appeared in three finals before in 2009, 2011, and 2016 but lost all. Kohli and ABD almost crossed the line for Bangalore in 2016 and in the final, Bangalore had control at the halfway mark but they missed out the opportunity against Hyderabad’s tight bowling. Bangalore showed some intent in mini-auction to build a champion side and they also released some players from the squad. In last season, Bangalore ended the playoff drought but lost to Hyderabad in the eliminator game. Kohli’s troops will be ready to build confidence among players to seal the title in 2021.

Bangalore’s last three seasons were not convincing. The previous season was slightly better after finishing eighth in 2019. They were in the top two at the halfway mark of the league-stage but slipped to third after losing the rhythm in the second half. They managed to seal the playoffs after three years but ended their campaign in the eliminator game. Kane Williamson and Holder’s resilience overshadowed the spinners’ effort. After reaching the final in 2016, Bangalore finished at the bottom twice in Indian T20 League.

Bangalore released big players from the squad and boosted their purses for the auction. They released players like Finch and Morris. Bangalore invested 14.25 Cr on Glenn Maxwell to find a finisher and middle-order option. Bangalore had issues with their bowling and they replaced Udana with New Zealand’s emerging star Kyle Jamieson with investing 15 Cr. They also picked some young Indian talents such as Azahruddeen who came in the news after scoring a fastest ton against Mumbai in the domestic T20 tournament. Sachin Baby and Rajat Patidar were the other Indian players which were brought in 20 Lakhs.

The overseas lineup has been the key element in Bangalore’s squad in the history of the Indian T20 League. From Chris Gayle to ABD, they have included big names so far. ABD will surely a big name in the overseas section and he is a regular asset for Bangalore who bats superbly in middle-overs. In last season, he scored 454 at an SR of 158.74. His acceleration is key in death-overs where Bangalore misses the touch. Maxwell would be a big factor in middle-overs despite his weak numbers for Punjab. He would be dangerous on flat tracks. Kyle Jamieson has been impressive since his debut for New Zealand and he can solve the issue of death-bowling. Kane Richardson also had a good season in Australia T20 League and he might be seen in the middle of the season.

Adam Zampa can be seen along with Chahal to crack the spin option in middle-overs and he will also be seen in few matches only. Daniel Christian is a big boost to Bangalore who will play as the main finisher. He has a great experience of playing T20s and recently, helped Sydney to retain the title in the Australia T20 League. Daniel Sams is also another option who can offer the same package at down-order. Philippe will not be available and Bangalore signed young Finn Allen from New Zealand who was the top-scorer in Super Smash this season.

How the Indian players stand for Bangalore

India's lineup is pretty strong for Bangalore and the first name comes with the skipper Virat Kohli who is the leading run-scorer in the history of this tournament. He won the MOS in India-England series by scoring 231 at an SR of 147.13. Devudutt Padikkal was the surprise package for Bangalore and he scored 473 runs in his debut season. Kohli and Padikkal will open for Bangalore as per Kohli’s statement during India-England series. Mohammed Siraj had a tremendous performance in the last two-three months on an international level and his last season was pleasing. Navdeep Saini has done his job on various occasions for Bangalore and with the new ball, he might be effective.

Washington Sundar’s improvement as an all-rounder is a happy sign for Bangalore. He kept his economy under control and he will be crucial in powerplay like he did in the previous season. Yuzvendra Chahal picked 21 wickets in the last season and provided breakthroughs in middle-overs. His success will play an important role in Indian conditions. Bangalore might try uncapped Indian talents and Mohammed Azharuddeen’s name is the first who had good numbers in the domestic circuit. Sachin Baby can also play in middle-order.

Weakness of Bangalore and how they can overcome these

Bangalore’s main concern is their middle-order and lack of intensity in death-overs. Bangalore concede easy runs in death-overs and they didn’t find a better bowler who bowls like Bumrah and Rabada in death. Kyle Jamieson or Kane Richardson might be that one bowler who can take this responsibility. Bangalore didn’t go for an Indian middle-order batsman in the auction. Middle-order lacked most and every time, we find ABD to rescue them. Kohli will now play in the opening slot so Maxwell will take this role with an Indian player who might be Sachin Baby or Sundar or any young Indian player. ABD can also promote himself up in the middle-order.

Bangalore spent 14.25 Cr on Maxwell, keeping in mind that Bangalore will play 7 matches at their home ground. The advantage of playing at flat-track is dull now as the new schedule didn’t allow home advantage. They will play 5 games in Eden, 4 in Motera, 3 in Chepauk, and 2 in Wankhede. Only Mumbai’s track is a pure flat track and others are slightly helpful to spin. Bangalore has to find a better team-combination for this season.