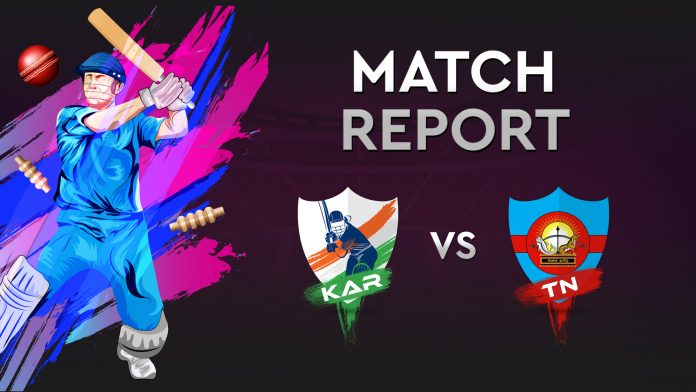 The final match of the Indian T20 Battle offered a rip-roaring experience for the fans. The classic final took place at the Lalabhai Contractor Stadium in Surat on Sunday and saw an incredible encounter between two amazing teams – Karnataka and Tamil Nadu. At the end of a nail-biting game, Karnataka smashed TN by 1 run and lifted the trophy.

With this victory, Karnataka has become the first team to win both the prestigious white-ball titles in the same domestic season. In other words, they are now India's domestic T20 as well as OD champions for the season.

Karnataka was put to batting first by Tamil Nadu. KL Rahul and Devdutt Padikkal opened the innings and gave a terrific start to the game by contributing 22 and 32 runs respectively. But the one who stole the limelight was Manish Pandey, who managed to score a brilliant 60 not out off 45 balls. He took the lead and hit a couple of sixes, taking the innings to its conclusion with 180 for 5 on the scoreboard. Pandey was assisted by Rohan Kadam, who made 35 off 28 balls. The duo together added 65 runs in quick time for the fourth wicket.

Karnataka restricted the opponent TN to 179 for 6 as the bowlers of the former team were just unstoppable. All 5 wickets for Tamil Nadu were taken by the spinners with Murugan Ashwin, while Ravichandran Ashwin picked up the wickets of Rahul and Mayank Agarwal (0) off consecutive balls.

Tamil Nadu got off to a poor start with Shreyas Gopal. Washington Sundar (24) and Dinesh Karthik (20) tried their best to turn the table their side. But unfortunately, they could not make it big. Then, the pair Baba Aparajith and Vijay Shankar strived hard to take the team as close to the target as possible. Ultimately, Tamil Nadu lost the game by 1 run, despite such fabulous partnership in the middle order and were felled by Karnataka.

After the match, TN captain Dinesh Karthik said, "Disappointed, but proud of the boys. The boys showed what they were capable of in the tournament.”
Also Read: 3 REASONS WHY SHREYAS IYER CAN BE INDIA'S PERMANENT NUMBER FOUR

Celebrating their second successive victory in the Indian T20 battle, Karnataka captain Manish Pandey said, "We had won it last year, but victory was sweeter this time. The way the boys played whole tournament was unbelievable. I can't thank anyone individually, everyone put in so much effort.”