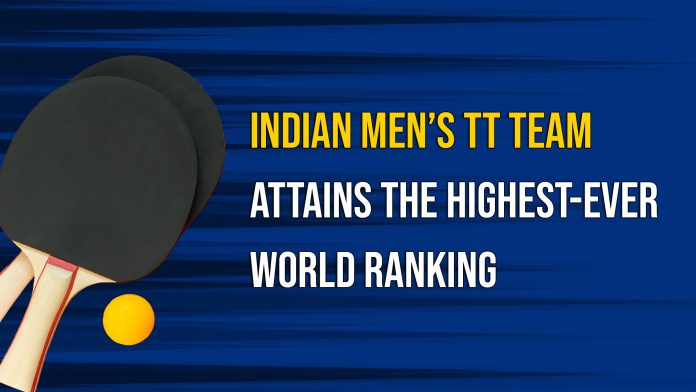 Indian Men’s Table Tennis team enters the top 10 world ranking. According to the latest rankings released by the International Table Tennis Federation (ITTF) on December 3, 2019, the team has attained the best-ever world ranking. India men’s TT team, who was previously at 9th position last month, has climbed to the eighth spot. The team is led by the likes of Sathiyan Gnanasekaran and Achanta Sharath Kamal and their undeniably incredible efforts have contributed to this remarkable accomplishment. Especially, Sathiyan’s exploits at the recently concluded World Table Tennis Cup have led to their glorious success.

On the other hand, China continues to retain its top position with 296 points, followed by Japan with 294 points and Germany with 292 points. The performance of Indian TT team has gone from strength to strength, therefore, it has been able to garner 280 points, reserving eighth rank for itself. France, who enjoyed being at eighth in November, unfortunately dropped to 10 position this month.

The journey of consecutive feats started with the historic gold win in the Commonwealth Games 2018.  Then, the team cliched a bronze medal at the Asian Games, followed by a gold at the Table Tennis Championships in July and their second best showing at another Table Tennis Championships in September, which placed the team at 13th position last year.

The ace paddler G. Sathiyan, who currently stands at No. 30, beat the higher-ranked opponent Simon Gauzy of France and Jonathan Groth at the World Cup in Chengdu, China. Apart form him, Harmeet Desai has claimed Indonesia TT Championship defeating Anthony Amalraj in the finals. He leapfrogged 19 places to enter into top-100 and grab the 85th spot. Moreover, Sharath Kamal jumped two spots to occupy 36th spot.

In women’s section, the leading players are Manika Batra who has acquired 61st position, being the top Indian in the ranking. Ayhika Mukherjee, on the other hand, holds 118th spot and Madhurika Patkar stands at 124.