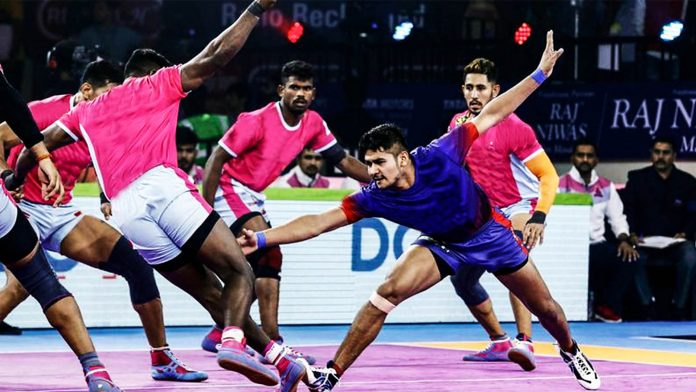 On Monday, Dabang Delhi upstaged Jaipur Pink Panthers 35-24 in a Pro Kabaddi League encounter to become the table-toppers in the seventh edition. Puneri Paltan, on the other hand, defeated Gujarat Fortunegiants 33-31to register their second victory of the edition.

Delhi’s raiders put on a superb show against Jaipur’s defense to hand their opponents their first defeat of the season. Delhi’s star sensation Naveen Kumar continued his fine run in PKL 7 with another Super 10, his fourth of the season and his third consecutive Super 10.

He scored 12 raid points from just 18 raids and was brilliant throughout the match. Naveen didn’t have a single unsuccessful raid in the match, the second time he has managed this feat in PKL 7.

Chandran Ranjit also had a superb game with eight raid points. He made a crucial Super Raid in the second half where he got a six-point raid (4 defenders + 2 all-out points) that swung all the momentum towards Delhi. Ranjit also chipped in with two tackle points. Naveen and Ranjit scored 20 of the 21 raid points for Delhi on Monday.

The next encounter will be played between U.P. Yoddha and Tamil Thalaivas at Patliputra Sports Complex in Patna on Wednesday.