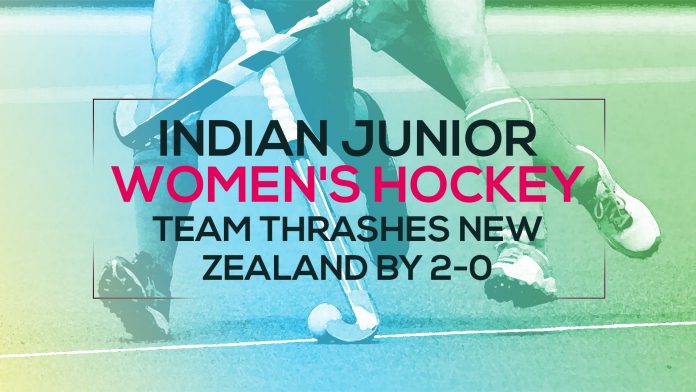 Indian Junior Women’s Hockey Team started its sojourn at the three-nation tournament with a superlative victory. The team decimated their opponent New Zealand by 2-0 during their opening match, which was conducted on Wednesday in Canberra. Indian team kicked off the match with an aggressive start. In the opening quarter, Indian striker Lalrindiki found enough space in front of the goal to slot the ball home and score in the first 15 minutes of the game. New Zealand, on the other hand, had a chance to equalize in the second quarter from the penalty corner, but it failed to capitalize.

India maintained 1-0 lead over New Zealand after the conclusion of first-half. Indian goalkeeper Bichu Devi Kharibam, who made a good save, also contributed to the India’s one-goal advantage.

The third quarter was filled with surprises, as Indian team was awarded with penalty corners at the start of the period. New Zealand also won a penalty corner at the end, but India’s defensive line stood firm. In the fourth quarter, New Zealand searched for an equalizer and with 30 seconds remaining on the clock, India managed to secure the 2-0 lead with mid-fielder Prabhleen Kaur scoring a goal in the 60th minute.

In this tournament, Indian team is supposed to play four matches with each opponent. After the recent clash, India will square off against Australia on December 5, New Zealand on December 7 and Australia again on December 8.

Indian Team targets to perform at the Asia’s quadrennial International Women's Field Hockey competition to be held next year. Indian Team Coach Baljeet Saini said, “We are also hoping that these four matches will give us a good idea of how the team is shaping up in terms of dealing with different scenarios that you face during a match”.