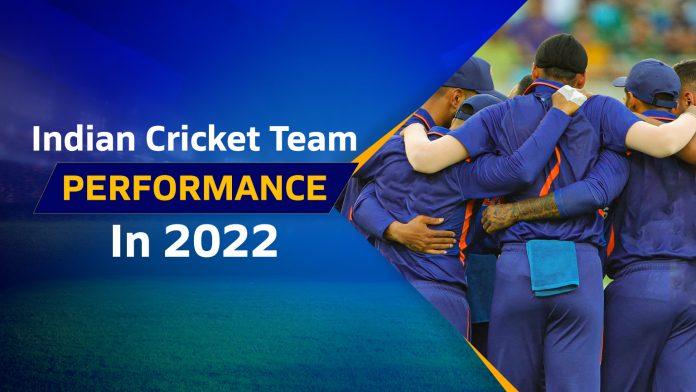 The Indian cricket team experienced a rollercoaster of highs and lows in 2022, with some promising performances tempered by disappointments in multilateral tournaments. Despite a promising start to the year with solid performances from captain Rohit Sharma and star player V. Kohli, the Indian cricket team experienced a number of setbacks in 2022. So, today, let us take a look into the Indian Cricket Team Performance in 2022.

A Disappointing Loss Against South Africa

In January, they lost two Tests and the series against South Africa 1-2. As the Proteas dominated the field, they convincingly won the next two Test matches by seven wickets each, shattering the hopes of the Indian team. The Men in Blue, led by KL Rahul in place of the injured R. Sharma, suffered a devastating 0-3 loss in the subsequent ODIs.

Another Chance Missed Against England

As the Indian cricket team travelled to England for the rescheduled Test match in Birmingham, they faced a setback with R. Sharma being ruled out due to COVID-19 and J. Bumrah being named captain in his place.

Despite a rough start, the visitors managed to score over 400 in their first innings thanks to impressive performances from R. Pant and R. Jadeja. The Indian team maintained their control of the match for the next few days.

However, their batting struggled in the second innings. England ultimately managed to chase down a 378-run target in 76.4 overs, with J. Root and J. Bairstow both scoring centuries in an unexpected victory over India.

‘SKY’ Is Not The Limit

One of India’s standout performances of the year occurred during their white-ball series in England, where they emerged victorious in both the T20I and ODI series with a 2-1 margin.

S. Yadav, also known as SKY made an impressive 117 runs off 55 balls in the third T20I, unfortunately in a losing match. In the opening ODI, J. Bumrah led the Indian team to a 10-wicket victory over England at The Oval with his impressive 6 wickets for 19 runs.

However, the home team fought back to even the series. In the decisive match in Manchester, R. Pant scored a pressure-filled 125 not out to lead the Indian team to a memorable series win.

The Rollercoaster Ride At The Asian T20 Cup

The Indian cricket team began their Asian T20 Cup campaign with a victory over Pakistan, winning by a margin of five wickets in Dubai. H. Pandya’s six in the final over helped secure the win for the Men in Blue in a thrilling match.

Pakistan fought back and won the Super 4 match against India in another close finish. Despite their strong history in the tournament, India underperformed and was defeated by Sri Lanka by a score of six wickets, eliminating them from the competition.

One bright spot for the Indian team in an otherwise disappointing year was V. Kohli’s return to form in the white-ball formats. After taking a break from the game, Kohli scored his first international century in over 1000 days with a powerful 122 runs off 61 balls in the Asian T20 Cup match against Afghanistan.

In the World T20 Cup 2022, Kohli once again faced off against India’s archrival Pakistan and delivered an unforgettable performance with 82 runs off 53 balls, leading the Indian team to a miraculous victory at the Melbourne Cricket Ground. Despite being behind with a target of 160 runs to chase and losing four wickets early in the game, Kohli’s impressive strokes carried India to a stunning win.

An Unbelievable Turn Of Events At The World T20 Cup

The Indian cricket team struggled in their important matches at the tournament, with the exception of their game against Pakistan. In their other two major games, the team was unable to perform well.

Against South Africa, Ngidi’s strong performance with 4 wickets for 29 runs on a bouncy pitch in Perth led to the Indian team’s defeat. SKY was the only player who put up a fight with a score of 68 runs off 40 balls as India managed to score 133 runs for 9 wickets in the first inning.

The outcome of the match was essentially decided after that. Despite victories in the Super 12 matches against the Netherlands and Bangladesh, India was unable to advance to the final and was soundly defeated by England in the semi-final in Adelaide.

Despite defending a total of 168 runs, the Indian bowlers were unable to claim a single wicket as A. Hales and J. Buttler scored 86 and 80 not out, respectively, to secure England’s spot in the final with a resounding victory.

A New Star Is Born

As the Indian cricket team hoped to end the year 2022 on a positive note by winning the ODI and Test series in Bangladesh, they were met with resistance from the host team.

India’s performance in the ODI series was underwhelming, losing the first two matches after having winning positions. As a result, they suffered their second consecutive bilateral ODI series loss in Bangladesh. I. Kishan provided a bright spot for the team in the final game, setting a new record for the fastest double in men’s ODI history.

So, this has been the overall Indian Cricket Team Performance in the past year. With so many highs and lows, the Men in Blue will now make sure that 2023 will be their year.