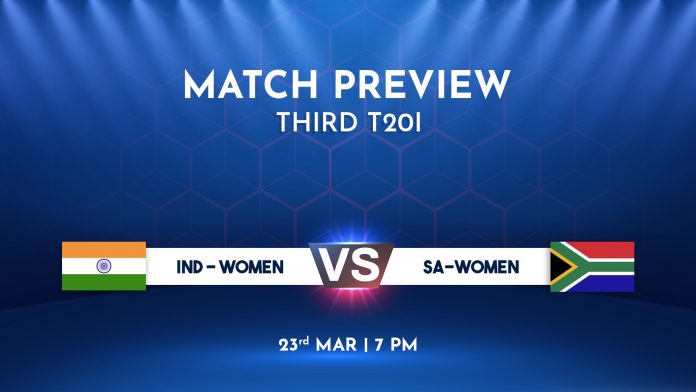 India and South Africa will meet for the final time in the T20I series. South African have taken an unassailable 2-0 lead in the series after winning the first two matches.

India’s poor form after the COVID break continues and South Africa won their maiden T20I series in India. India had a huge pressure before entering into the second game and they posted an imposing total of 158, courtesy of Shafali’s 31-balls 47 and Richa Ghosh’s 26-balls 44. India scored 64 runs in the last 7 overs to get this total. India controlled runs in the first ten overs, despite the fire from Lee but lost the grip in death-overs. Arundhati Reddy’s one no-ball cost India a series and Proteas added one more milestone on this tour by winning another maiden series win in India.

Team combination is not a concern for India. They were a better side in the previous game but lost on the last ball due to an error. Reddy’s no-ball allowed South Africa to play one extra-ball and free-hit provided them freedom. Mandhana could have gone with the spin-option in the final over. It was India’s third consecutive T20I loss and first series loss against Proteas. There is no news of Harman’s recovery so Mandhana may lead the side for the third time. Richa Ghosh’s blistering knock is a positive sign. Harleen has been a key figure and she delivered her role brilliantly in the absense of Harman. Deepti and Radha’s combination in spin was a key point for India but the efforts are pushing India towards victory.

Meanwhile, South Africa looked fresh and motivated throughout the tour. Their majority of the players have at least one good performance on this tour which signifies their success. Wolvaardt played a match-winning knock in the crucial chase. Their bowling unit also had positive moments in this series. Proteas would look to make clean-sweep against India and they have a great opportunity as India re going through a struggling form. South Africa can rest any key player to try a new player in playing XI.

Lucknow’s track is a good track to bat and after so many matches, batting is quite easier in both innings. It will offer a good amount of spin in middle-overs. Batting would be slightly easier in the 2nd innings. Toss will play an important role.