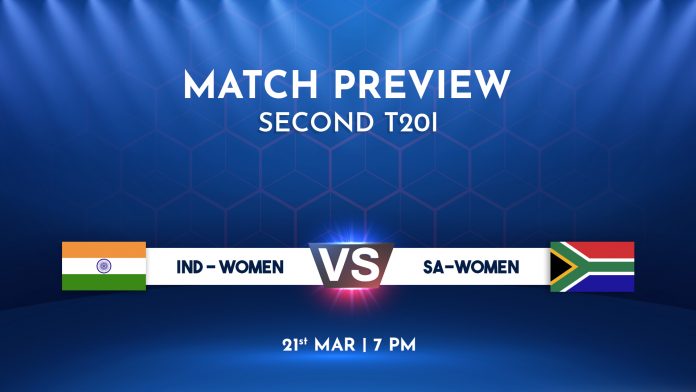 India will continue the T20I series and play the second T20I tonight to save the series. South Africa made a brilliant start to their India tour by winning the first-ever ODI series in India and then, they took a 1-0 lead in the T20I series. They’re just one win away to make the double on this tour. 2020 T20 WC Runner-ups were outplayed in all departments and Proteas earned their 5th victory of this tour. In the absense of Harmanpreet, Mandhana led the side and India lost the important toss.

After losing Mandhana early, Shafali and Harleen added vital runs but the run-rate was under control. Harleen scored her half-century and Rodrigues also contributed important 30 runs. From 116/2 in 17 overs, India added just 14 runs in the last 3 overs and lost 4 wickets. South Africa made this chase an easy task despite losing Lee’s wicket early. Bosch and Luus added 90 runs for the second wicket. Harleen added the breakthrough but it was a delayed effort and India lost by 8 wickets.

Harman’s availability is in doubt after suffering an injury in the last ODI and she will miss another game. Shafali Verma has to play her natural game and her start with Mandhana will play a vital role for India. Jemimah Rodrigues and Harleen Deol both carried the middle-order very well in the absense of Harman. India will play with their two quality spinners, Poonam Yadav and Gayakwad.

India played just one T20I match since their historical final against Australia in MCG, one year ago. They still need to adapt the game. They are a compact side when it comes to the shorter format. India defeated South Africa in the last T20I assignment at home with ease. Both India and South Africa made it into the semifinals of the World Cup 2020. India have a big pressure but they can bounce back tonight.

Meanwhile, South Africa are highly motivated after the ODI success and the win in the first T20I. They would look to extend their winning run in the T20 format as well. Proteas recently claimed the second position in ODI Rankings and victory here can boost their rankings in T20 as well. Proteas had earlier played against Pakistan at home and won the T20I series 2-1. Under Sune Luus, visitors have the fire which can outplay India in Lucknow. Lizelle Lee is going through a dream phase of her career and won the Player of the Series in the recently concluded ODI series. Bosch’s all-round brilliance says everything about the strength of South Africa. Toss will surely play an important role but any score above 140-150 will not be easy to chase.

Lucknow’s track is a decent T20 track and the surface might offer a good amount of spin in middle-overs. Batting would be slightly easier in the 2nd innings. 150 would be an imposing total on this surface.