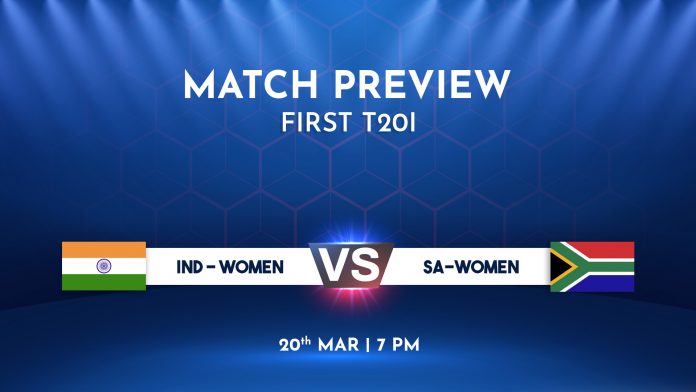 India and South Africa kick start the T20I series with an opening clash tonight. Team India would look to start positive after losing the ODI series 4-1.

India will resume their home assignment with the T20I series. South Africa made a brilliant start to their India tour by winning the first-ever ODI series in India. Team India were outplayed in all departments and won just one game out of five. The T20I squad will be slightly different from ODI squad and Harmanpreet Kaur will lead the side. Harman’s availability is in doubt after suffering an injury in the last ODI. If she fails to achieve fitness, Mandhana will lead the side in the first T20I. Teenage sensation Shafali Verma will be back in a blue outfit and she will open with Mandhana. Jemimah Rodrigues and Harleen Deol both will bat in middle-order in the absense of Harman. India will play with their two quality spinners, Poonam Yadav and Radha Yadav. Monica Patel was effective in the last game and she may get the chance along with Arundhati Reddy to lead the pace-attack. Rajeshwari Gayakwad’s ODI brilliance can also give her a spot in the final playing XI.

India were the runner-up side of the T20 World Cup 2020 and they haven’t played a T20I match since the final against Australia in MCG, one year ago. Team India are a different side when it comes to the shorter format. Shafali made herself a star player and her acceleration does wonder for Women in Blue. India defeated South Africa in the last T20I assignment at home with ease. Both India and South Africa made into the semifinals of the World Cup 2020. ODI series loss can affect India’s goals but they are slightly ahead of Proteas in this format.

Meanwhile, South Africa are highly motivated after the ODI success and they would look to extend their winning run in the T20 format as well. Proteas had earlier played against Pakistan at home and won the T20i series 2-1. Under Sune Luus, Proteas have the fire which can outplay India in Lucknow. Lizelle Lee is going through a dream phase of her career and won the Player of the Series in the recently concluded ODI series. Du Preez also continued her top form with the bat and she is a key figure for Proteas in middle-order. Toss will again play an important role but spinners will add some drama in the end.

Lucknow’s track is good for batting and the surface might offer a good amount of spin in middle-overs. Batsmen will get good assistance from the pitch. 150 would be an imposing total on this surface.