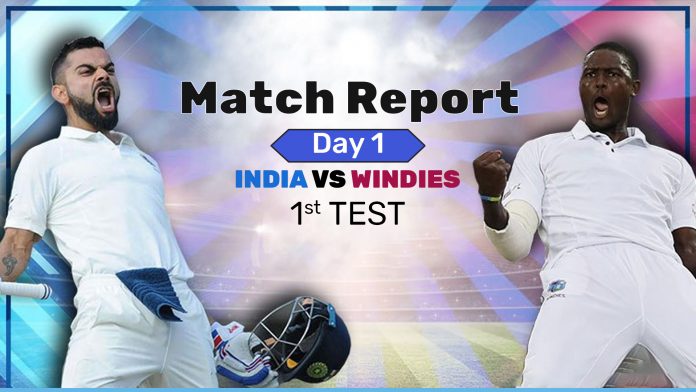 Ajinkya Rahane’s hard-fought 81, coupled with handy knocks KL Rahul and Hanuma Vihari helped India to recover from a top-order collapse to post 203 for 6 on the rain-curtailed opening day of the first Test against West Indies in Antigua.

West Indies and India’s start of World Test Championship was delayed by 15 minutes due to morning showers. As the clouds cleared over Antigua, it turned out to be a bright sunny morning and batting first looked well on cards for the captain who wins the toss. However, Jason Holder, skipper of West Indies, sprang a surprise – opting to bowl against India’s promising batting line up.

He stood vindicated as India was reduced to 25 for three in a span of 8 overs. Mayank Agarwal, Cheteshwar Pujara, and Virat Kohli all took by a surprise as moisture in the wicket made West Indies bowlers look in different space altogether. Losing three wickets early, the Indian team was looking for a partnership to get themselves back into the game.

KL Rahul and Rahane played on the money and continued to rotate the strike. Ones and twos, with boundary on the loose ball, helped duo strung a partnership of 68 runs before former was sent back to the pavilion by fine wicket-keeping skills from Shai Hope.

Hanuma Vihari then joined hands with the Indian vice-captain and played a perfect second fiddle in the 82-run partnership for the fifth wicket. Rahane raised his 18th Test half-century in the minutes leading up to Tea. The session break, though, had to be taken early due to the rain interruption that consumed another 20 minutes of play.

A few overs after Tea, Ajinkya Rahane played a rash shot and missed 10th Test ton by 19 runs. West Indies managed to get to quick wickets to get hold of the game. Pant along with Jadeja helped India to go past 200 on day one before the third rain interruption proved fatal as stumps were called early.