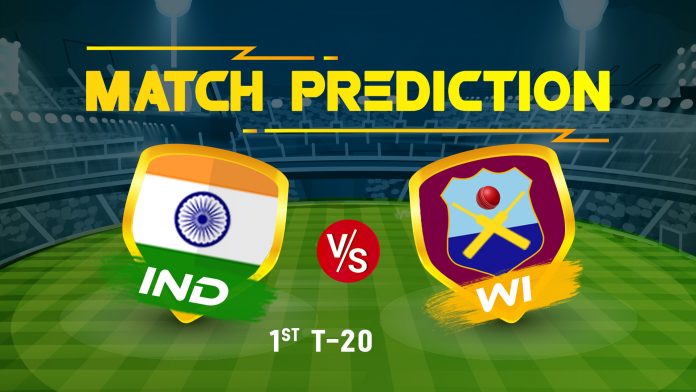 Team India is set to resume battle with West Indies after a successful tour to the Caribbean Islands, with the first T20I at Rajiv Gandhi International Stadium in Hyderabad. The match is scheduled to start at 7:00 PM IST. With this series, India would look to refine their preparations for the T-20 World Cup in Australia next October. India’s record against West Indies in T20Is in recent years has been excellent. The Virat Kohli led side has won all their last six T20 matches against the Caribbean side in the last 13 months. West Indies, on the other hand, will be without their prolific batsmen Russell and Gayle, will undoubtedly face a stern test against the mighty hosts.

Skipper Virat Kohli is back in the shortest format after having taken a break in the Bangladesh T20I series. Bhuvneshwar and Mohammad Shami are also marking their return in the T20 format. Barring Deepak Chahar, Indian pacers were under the hammer during the T20I series against Bangladesh, but the return of the pace duo has surely strengthened their pace attack. Kuldeep Yadav also makes his return, and the spinner along with his partner Chahal will be looking to give the Windies batsmen some tough time in the middle. K.L Rahul will be opening with Rohit Sharma in the absence of Shikhar Dhawan, and he would be hoping to carry his excellent form from domestic cricket to international format and book his ticket to Australia for the World Cup.

West Indies lost 2-1 to Afghanistan in the T20Is before this series. Windies haven’t been at their best in recent years. Their win percentage in 2019 is 30.77 which is the second-lowest after Zimbabwe. Nicholas Pooran, Keiron Pollard and Fabian Allen hold the key for West Indies if their team is to succeed in the series. Coming as an underdog, West Indies will be looking to surprise the Indians.

The match is scheduled to be played at Rajiv Gandhi International Stadium, Hyderabad. The pitch in Hyderabad tends to be slow. The dew will play a significant role in the second half.

It will be a cold and windy evening in Hyderabad but no possibility of rain throughout the match. The temperature will be between 13 to 15 degrees Celsius.