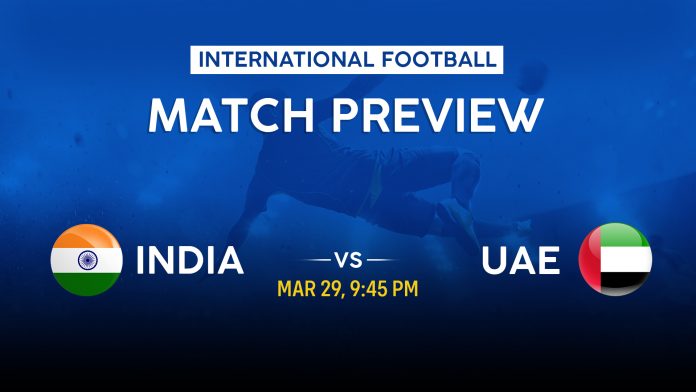 India will face UAE in their second international friendly affair in Dubai. India held Oman for a 1-1 in their previous game, courtesy of Manvir Singh’s header in the second half.

India will wrap up their Dubai tour with a second international friendly game when they face hosts UAE on Monday night. India made a good start to their international season and ended the losing streak against Oman with a 1-1 draw. Oman kept possession of the ball in most of the minutes and dominated the first half. In the 43rd minute, Oman took the lead following an own goal from Chinglensana Singh.

Igor Stimac made few substitutions in the second half. India equalised in the 55th minute when Bipin Singh delivered a cross to Manvir Singh and Mariners forward scored. Indian defense kept themselves tight to avoid any winner from Oman. India handed the international debuts to 10 players in the last match, the highest number of debutants in a single game for the Indian football team. India will look to carry this form against UAE to wrap up this small Dubai tour.

Recently concluded Indian Football League helped Indian players to improve their game. Manvir Singh did the same for Mariners and he scored an equaliser for India. UAE played an international friendly in January this year against a better-ranked team Iraq and the hosts held Iraq for a goalless draw. UAE participated in World Cup qualifiers and stand at fourth in Group G with two wins and two defeats. They also missed out the semifinals in Gulf Cup and finished third in Group A. Ali Mabkhout scored one brace and one hattrick in Gulf Cup and he will be the key figure for UAE.

India and UAE last met in AFC Asian 2019 and UAE won the match 2-1. India have two wins against UAE out of 14 and three matches were ended in a draw. India have appeared in four draws in the last five matches and this is a good improvement for Men In Blue. They are winless from the last 10 matches but came close to victory six times. India will look to better their numbers against UAE to end their tour. Both teams are fresh and there is no injury concern. India will likely to field the same playing XI.