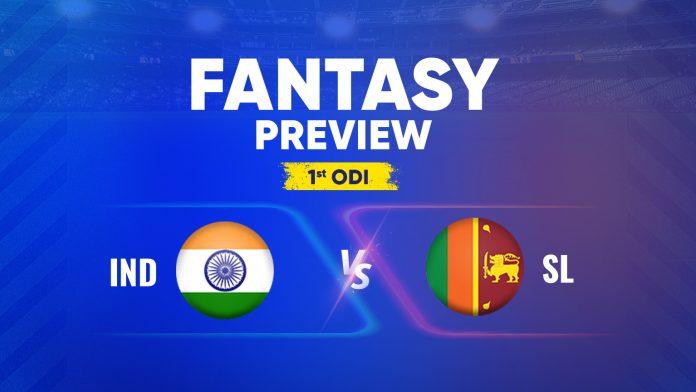 As the first ODI match of the 3-match series between India and Sri Lanka approaches, anticipation is building for what promises to be a highly competitive and exciting encounter. Both teams will be looking to get their ODI campaigns off to a strong start when they meet at the Barsapara Stadium in Guwahati on 10th January. Both sides boast of talented players and the match is sure to provide plenty of entertainment for cricket fans. Let’s take a closer look at the fantasy preview for the match and see how the teams might line up.

Many key players including skipper Sharma, star batsman Kohli and pacer Shami are back for the ODI series. After a convincing win in the final T20, the Men in Blue would be flying high with confidence. Many youngsters delivered strong performances in the T20Is and would surely give coach Dravid a headache to select his playing XI for the first ODI.

After giving Team India a run for money in the T20 series, Sri Lanka would be looking to go toe-to-toe with the experienced Indian side in the ODIs. The side still lacks depth and experience in pace bowling but this series might benefit the inexperienced bowlers in the long-run. The Lankan Lions however have a decent run in past 10 ODI matches as they have won 6 and lost 4. The side will once again rely on skipper Shanaka, star player Hasaranga and opener Mendis to anchor the innings.

India and Sri Lanka will face each other in the first ODI of the 3-match series on 10th January at 1:30 PM IST. The lineups of the match will be available at 1:00 PM on MyTeam11 app.

The Barsapara Stadium in Guwahati will host the first ODI of the 3-match ODI series between India and Sri Lanka. The 50,000-seater stadium was inaugurated in 2017 and till date has only hosted one ODI match in 2018, when India defeated West Indies by 8 wickets.

The ground usually hosts Ranji Trophy matches of the Assam team. The pitch at Barsapara Stadium is a flat wicket where spectators can enjoy high-scoring matches. Out of form Indian top-order would look to take full advantage of the ground to regain confidence. The team winning the toss may look to field first and chase total on the board as due is expected in the evening.

The captain of Team India, Sharma, would be looking to begin 2023 with a bang at one of his favourite grounds. In 2022, Sharma experienced an unsuccessful year on the international stage, accumulating a total of just 249 runs in 8 matches. Sharma will aim to put 2022 in the past and strive towards securing and guiding the Men in Blue towards their first ODI victory of 2023.

The Lankan skipper was the most dependable player in the T20 series and will hope to shine in his role in the ODI series as well. Shanaka contributes in all three facets of the game as he is a reliable lower-order batsman, handy bowler and an exceptional fielder. He is one of the most key captaincy picks for fantasy teams.

Here are the probable XIs for the 1st T20 between India and Sri Lanka.

Hope the team preview was useful for you. It’s now time to join exciting cricket action on MyTeam11. Make fantasy teams in the 1st ODI between India and Sri Lanka to win big cash prizes. Also, if you want to win rewards like iPhone 14, iPad, Samsung Smart Watch, you can take advantage of the Refer & Earn campaign on the MyTeam11 app.