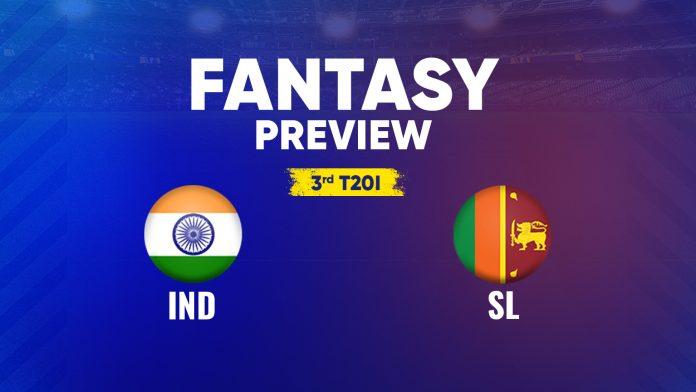 India vs Sri Lanka third T20 match will be played on Saturday. Suryakumar Yadav and Axar Patel have provided hope for the future of India’s T20I team, with Patel delivering a consistent performance in this particular game. Sri Lanka, the reigning Asian champions, have played exceptionally in this series, nearly winning the first T20I and dominant in the second, ultimately defeating India by 18 runs.

India will likely be looking to address the issues that led to their batting collapse in the powerplay during the recent T20I match in Pune, where they were chasing a significant target. While the total was not beyond the capabilities of India’s batting lineup, poor execution from the top order put them in a difficult position.

India’s strength currently lies in the lower-middle order with H. Pandya, Hooda, A. Patel, and Suryakumar Yadav has been key players in the middle order. Patel has the potential to be India’s new finisher, which would allow Pandya to experiment with his own batting position.

Sri Lanka has had a strong showing in this series against India, building on their previous success in the Asia T20 Cup. The pacers were successful in defending a 200+ total in the recent T20I match in Pune, even with due on the ground later in the innings that could have favoured India.

Players such as Rajapaksa and D. de Silva, who have struggled to score runs, will need to make contributions if Sri Lanka is to emerge victorious. Shanaka cannot always be relied upon to lead the charge, and other players such as C. Asalanka and Nissanka will need to step up.

India and Sri Lanka will face each other in the 3rd T20 match on 7th January at 7:00 PM IST. The lineups of the match will be available at 6:30 PM on the MyTeam11 app.

The pitch at this venue is renowned as one of the best for batting in India and is likely to produce a high-scoring match given the strong batting lineups of both teams. The weather is expected to be sunny with a high temperature of 32 degrees Celsius.

The average first innings score in T20Is at this venue is 179, while domestic T20 matches have seen an average of 169 runs. Given these statistics, a total below 185 runs may not be sufficient for the team batting first.

W. Hasaranga: Hasaranga has taken over 40 wickets in the format, including a hat-trick on his international debut. Hasaranga is also a useful lower-order batsman and has scored valuable runs for his teams. His all-around skill set makes him a valuable asset in T20 cricket.

Here are the probable XIs for the 3rd T20 between India and Sri Lanka.

Hope the team preview was useful for you. It’s now time to join exciting cricket action on MyTeam11. Make fantasy teams in the 3rd T20 India vs Sri Lanka match and you might win big cash prizes. Also, if you want to win prizes like iPhone 14, iPad, Samsung Smart Watch, you can take advantage of the Refer & Earn campaign on the MyTeam11 app.