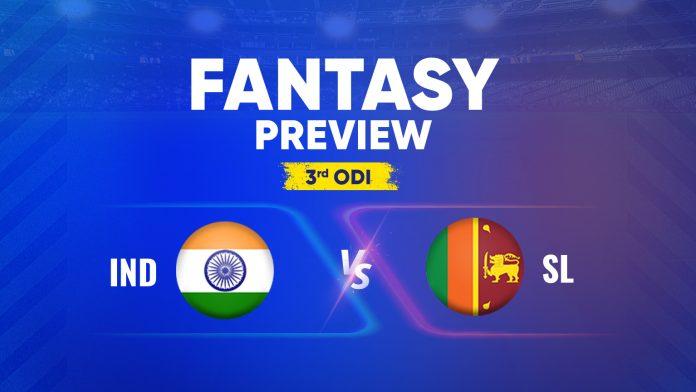 As the 3rd ODI of the three-match ODI series between India and Sri Lanka approaches, excitement is mounting for what promises to be a fiercely contested and thrilling encounter. Both teams will be eager to secure a victory in the final ODI at the Greenfield Stadium in Thiruvananthapuram on January 15th. With both sides boasting a wealth of talented players, the match is sure to provide plenty of entertainment for cricket fans. But before the match starts, let’s dive into the fantasy preview and see how the teams might line up. With the stakes high, it’s sure to be an epic matchup that you won’t want to miss!

As the Indian cricket squad, led by Sharma, sets its goal on completing a series sweep against Sri Lanka in the final match of the three-match ODI series, all attention will be focused on the Greenfield Stadium. The preceding encounter, held in Kolkata, saw the Men in Blue secure a 4-wicket triumph, thanks to the outstanding batting of KL Rahul and the outstanding bowling of Yadav, who took 3 crucial wickets and won Man of the Match. With a commanding 2-0 lead, Team India will be seeking to end the series on a high note on January 15th.

Sri Lanka, helmed by the determined Shanaka, will be eager to restore some dignity and win the final ODI of the series. The Lankans will be striving to bounce back strongly after consecutive losses and take something away from the series. But it will be a difficult task for them as they will be facing an Indian team undefeated in 23 consecutive home series.

India and Sri Lanka will face each other in the 3rd and final ODI of the series on 15th January at 1:30 PM IST. The lineups of the match will be available at 1:00 PM on the MyTeam11 app.

The Greenfield Stadium in Thiruvananthapuram, boasting a capacity of 55,000, will be the venue for the final ODI match between India and Sri Lanka. The home of the Kerala Ranji team, the stadium typically utilises drop-in pitches and it is anticipated that this will be the case for the upcoming match as well. The ground has a fast outfield, which will play a vital role when the dew factor comes into play.

The pitch at Greenfield Stadium initially offers some help to the pacers, with the wicket expected to show some movement off the seam. As the game goes on and the surface starts to deteriorate, it’s forecasted to become more favourable for batting.

M. Siraj: Quick bowlers thrive at Greenfield and Siraj is likely to be one of the beneficiaries on Sunday. Siraj has been India’s best pacer in the series with two outstanding performances, claiming 5 wickets in 2 matches. With his lightning speed and swing, Siraj is poised to make a significant impact in the final ODI.

D. Shanaka: The captain of the Sri Lankan cricket team has already made his mark in the series by scoring a century. He is a valuable middle-order batsman, an elite fielder and a part-time bowler who can come in handy in certain situations. The all-rounder is a valuable asset for Sri Lanka and a crucial player to keep an eye on in the upcoming final ODI.

Here are the probable XIs for the 3rd ODI between India and Sri Lanka.

It’s time to join in on the thrilling cricket action on MyTeam11. Create your fantasy teams for 3rd ODI between India and Sri Lanka and have a chance to win cash prizes. Additionally, by taking advantage of the Refer & Earn campaign on the MyTeam11 app, you can earn rewards such as iPhone 14, iPad and Samsung Smart Watch. Don’t miss out on this opportunity to win big!