India vs. South Africa: Virat Registers 3-New records to his Name in Mohali 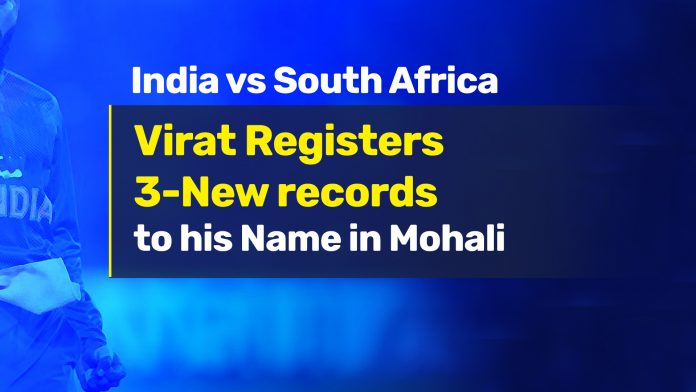 After the first T20I of 3-game-series between India and South Africa ended up being washed-out due to rain, India managed to pull off a 1-0 lead on Wednesday. The 2nd T20 played at Mohali saw India winning the toss and chasing a 152-run target to eventually emerge victorious by seven wickets.

Apart from India’s fantastic victory, the other event that caught the audience and fans by their eyeballs was Virat Kohli’s yet another record-breaking deed. Scoring an unbeaten 72 off 52 balls, Virat not just helped the hosts achieve a 7-wicket victory over the visitors, but surpassed Rohit Sharma to become the leading run-scorer in T20Is.

Also Read: BEN STOKES: JACK OF ALL, MASTER OF 'ALL'

Now, with 2,441 runs from 66 innings, Virat stands as the player with most-runs in T20Is followed by India’s Rohit Sharma and New Zealand’s Martin Guptill. Sharma and Guptill occupy the second & third position with 2,434 from 89 innings and 2,283 runs from 75 innings, respectively.

With the title of most-runs in T20IS, Virat achieved two more titles. He became the second player with most Man of the Match Awards, sharing the position with Shahid Afridi. He also achieved the feat of most 50+ scores in T20Is, scoring his 22nd tonne on Wednesday.