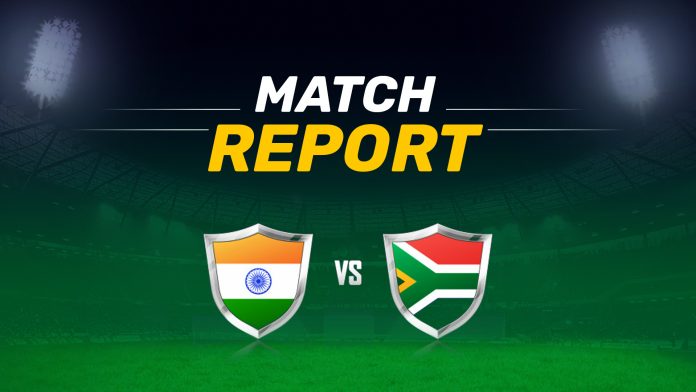 Virat Kohli's 71 coupled with Shikhar Dhawan's heroics helped the Indian team to take 1-0 lead against South Africa in three-match T20 series. With the bat, Virat Kohli blasted 22nd T20I fifty and toppled Rohit Sharma to become the leading run-scorer in Twenty20 Internationals. Kohli's fifty tally in T20 Internationals is most by any player at this level and it allowed India to decimate South Africa by seven wickets in Mohali.

For South Africa, they were subject to yet another masterclass from Kohli as he took the opposition apart. Quinton de Kock, captaining in his first game, included three debutants in Anrich Nortje, Bjorn Fortuin and Temba Bavuma as Kohli chose to bowl. Deepak Chahar, who impressed in the West Indies series with his pace and swing, struck early when he removed Reeza Hendricks.

De Kock, who has a good record against India, was given valuable support by Bavuma. De Kock started the aggression with three consecutive fours off Navdeep Saini while Bavuma signalled his intentions with a six off Hardik Pandya. The duo kept the scoreboard ticking but the 57-run stand was broken thanks to a special effort from Kohli. De Kock, who notched up his third fifty, sliced the pull to mid-off where Kohli ran and flung to his left to take a stunning one-handed catch. When Rassie van der Dussen fell to Ravindra Jadeja, South Africa was losing momentum in the death overs.

ALSO READ: Ben Stokes – Jack of All, Master of All

The pressure got a toll on Bavuma and he missed a chance to score a fifty on debut as he holed out to long-on. However, Andile Phehlukwayo and Dwaine Pretorius ended the innings with a flourish by smashing Saini for two sixes as South Africa ended on 149/5. In response, Rohit and Dhawan took full toll. Rohit blasted two sixes off Pretorius and Dhawan smashed boundaries off Kagiso Rabada.

However, Phehlukwayo dismissed Rohit for 12 but Dhawan and Kohli stitched an aggressive stand. Both batsmen never allowed the South African bowlers to settle and the 61-run stand put India in a comfortable position. The Proteas had something to cheer when Dhawan was dismissed for 40. The left-hander blasted Tabraiz Shamsi down the ground to long-on but David Miller flung to himself to his right and took a great catch. Rishabh Pant once again threw away a good chance as he pulled Bjorn Fortuin to short fine leg to hand the left-arm his first wicket.

Kohli, though, was in the zone and he was given good support by Shreyas Iyer as India coasted towards a victory. In the end, it was the same old story. Kohli dominating yet again in a chase and creating records. The only change is the opposition. The next match will take place at the M Chinnaswamy stadium in Bangalore and India, having won for the first time against South Africa at home, will be determined to continue the dominance.

Share
Facebook
Twitter
Previous articleBen Stokes: Jack of all, Master of ‘all’
Next articleIndia vs. South Africa: Virat Registers 3-New records to his Name in Mohali