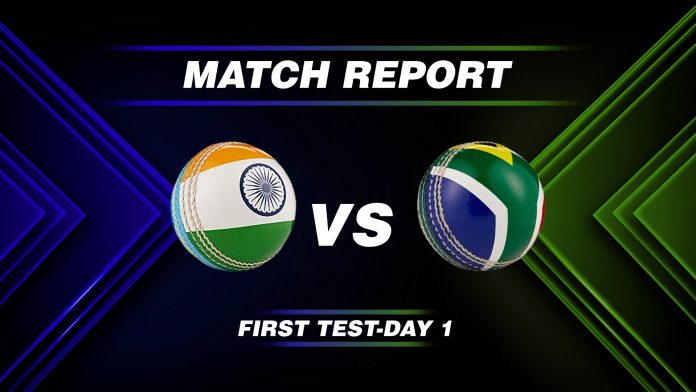 Before the start of the first Test between India and South Africa, all eyes were fixed on India's limited over specialist Rohit Sharma, who was set to return to his favourite position. Rohit showcased discipline, played himself in and got going. Rohit demonstrated his brilliance and gave Virat Kohli and a lot of Indian fans plenty to cheer by smashing his first century as a opener. Along with Mayank Agarwal's 84 and a 202-run opening stand, India dominated the opening day at the ADA VDCA stadium in Vizag. South Africa were spared the agony in the final session with rain playing spoilsport and that was their only silver lining.

The fact that Rohit was given first use of a dry pitch after Kohli chose to bat worked to his advantage. Philander generated some late swing and Rohit was beaten a couple of times. Kagiso Rabada also tried to play on his patience but Rohit overcame all that and applied himself brilliantly. After getting off in style with a crunching boundary off Rabada, Rohit survived a tough period.

After negotiating the first hour beautifully, Rohit and Mayank Agarwal ensured that they did not squander the advantage. Rohit broke the shackles in style by hammering left-arm orthodox spinner Keshav Maharaj for his first six. The right-hander neared his fifty with yet another six off Dane Piedt and a boundary off debutant Senuran Muthusamy. However, before lunch, Rohit had a nervous moment as he top-edged a sweep off Muthusamy just over the fielder at fine leg to notch up his fifty.

At the other end, Agarwal was looking in solid touch. He tackled the spinners brilliantly and notched up his fifty by hammering Keshav Maharaj over inside out over deep extra cover for a magnificent six. However, with Rohit motoring towards a century, Agarwal dropped anchor and slowly made progress. Rohit neared his century by blasting two consecutive sixes off Dane Piedt and steering a flatter delivery from Maharaj to the third man fence.

Rohit notched up his landmark by driving Muthusamy to deep cover and the celebrations spoke of the importance of the knock. Rohit became the fourth Indian after KL Rahul, Shikhar Dhawan and Prithvi Shaw to score a century in his maiden innings as an opener. Ever since 2016, Rohit has actually had a good run in Tests. In the series against New Zealand, Rohit smashed 82 and 51 in the Kolkata and Nagpur Tests followed by a century against Sri Lanka in Nagpur 2017.

Agarwal also notched up his highest individual score and the partnership went past 200 but rain had the final say with the entire final session getting washed out.